Whilst it’s been out in other territories for a couple of months now, we’re taking a look at the Hummel 86 Gold as it hits the Footy-Boots.com store! 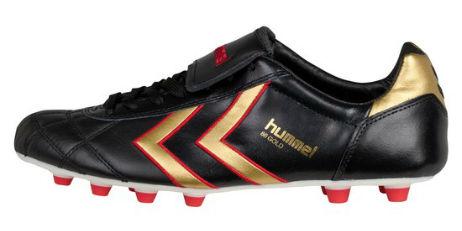 But to be honest, we could put the Hummel 86 Gold in the spotlight 10 years from now (or even 10 years ago!) and it would still be the same boot – after all, you don’t tamper with a classic!

From the same vein as other mainstays like the adidas Copa Mundial and Mizuno Morelia, the Hummel 86 Gold is a true heritage icon and a testament to old-school design. 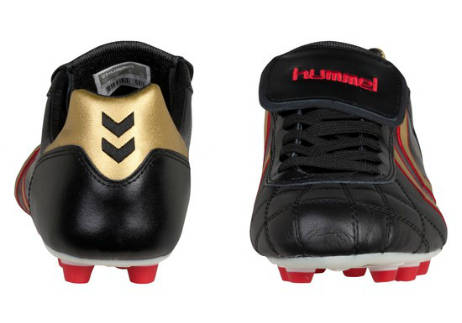 True to the blueprint of the boot that was worn by so many players in the 1986 World Cup in Mexico, the Hummel 86 Gold is finished in a Kangaroo leather exclusive to Hummel and is treated to be amongst the softest on the market

The classic Hummel branding of two chevrons is given a fresh look, as they’re emblazoned in Gold and Red across the midfoot; a perfect match for the ’86 Gold’ printing on the heel and the embroidery on the tongue. 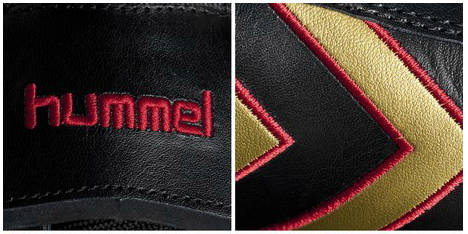 The Danish brand haven’t kept everything the same as the 26-year-old boot, mind you. Not only is the K-Leather much lighter and more water resistant than the previous model, Hummel’s more modern ‘Flexsole’ outsole has also been incorporated into the design.

Aimed at offering new levels of stability on the tried-and-tested ‘moulded’ soleplate, Flexsole also has a high elastic return, for a greater feel of acceleration and imorived responsiveness.

Having lead the pack in terms of quality leather boots for nearly 100 years – and still finding time to produce innovative synthetics, too – it’s nice to see Hummel revisit their heyday with the 86 Gold.

Any lovers of this old-school classic out there? If so drop us a comment!