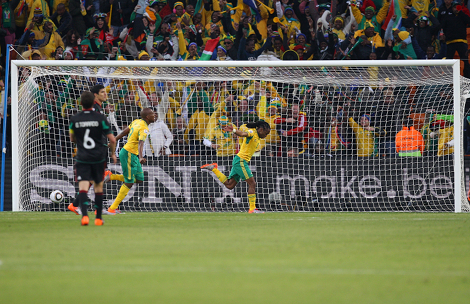 South Africa took the lead thanks to an astonishing strike from Siphiwe Tshabalala, who expertly latched onto a pass from Teko Modise before hammering a left-footed drive off his Nike CTR360 Elites and into the top corner.

The hosts held onto the lead until 11 minutes before time, when some scrappy marking from the Bafana Bafana backline allowed Barcelona’s Old-Hand Rafael Marquez to tap in from within the 6-yard box to level for Mexico.

The game was watched with baited breath by the 90,000 strong Soccer City crowd, with a carnival atmosphere both inside and outside the new arena. The game, however, was not without it’s controversy as Arsenal youngster Carlos Vela saw a goal denied by the linesman’s flag, enforcing a widely-overlooked stipulation regarding goalkeeper’s positioning during the final phase of play.

Written By
Kyle Elliot
More from Kyle Elliot
See the boots Rooney, Torres and more will be wearing at the...
Read More