During the past few weeks the leading football boot manufacturers have released a wide variety of new models and colourways. Despite the current economic climate, consumer choice continues to grow and expand with ever more speed.

The shelf life of football boots continues to shorten each year. With the World Cup coming up next year in South Africa, no matter what pair of football boots you’re currently lacing up you can bet your money they’ll be out of fashion in a matter of months. As for the “technology” incorporated into these football boots, they’ll be far “outdated”.


For Ronaldinho fans I’m sorry to say that I believe his signature line of boots may be dropped. The good news is Nike will be adding to their product range with the new Nike CTR360.

I’m also led to believe the ‘shotshield’ technology is to be removed from the Laser III and I’d assume Nike will release an improved version of the Vapor in conjunction with the 2010 World Cup.

The other heavyweight adidas will also be developing their range. The next F50 is said to end the TUNiT system which could be replaced with traditional bladed studs.'  Also on the horizon before the turn of the year is the Predator TruStrike, followed by the adiPure III shortly afterwards. All these new football boots to come and I haven’t even touched on the likes of Puma, Umbro, and Lotto amongst others.

Emmanuel Adebayor and the latest F50, the adidas F50i

As you may have guessed, I am a football boot nut and as a result enjoy having a broad selection of football boots to choose from, but I do sometimes feel like I am being fleeced when a slightly varied version of a boot is released, especially after just investing in a new boot. Many young footballers like to stay up to date with fashion these days, but its becoming even more expensive to do so.

It seems possible that NikeiD and miadidas may soon become obsolete. With an ever increasing selection of colours anyone can find a boot to match any kit or a boot that will make them stand out on the pitch and have them personalized to top it off.

In an industry where plastics and flash colours prevail, I have to pay my respects to the traditional football boot. Models like the the adidas Copa Mundial that have withstood the test of time and continue to offer quality comfort and touch. 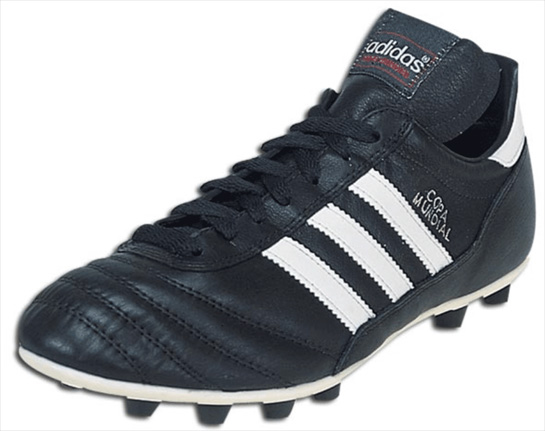 
The newest editions of traditional football boots sometimes go unnoticed. The adiPure II, Puma King XL, and Nike Tiempo Legend III include the classic lines and traditional styling, but with updated materials, enhanced features and new design details. They are what a football boot should be about, but it seems all the marketing is geared towards the flash boots.

For this reason I have to give some praise to Umbro for reaching back to their roots in the designing of the new England kit and the soon to be released Speciali.

David Beckham in the new England Kit, with Umbro pitch side hoarding.

Umbro’s return to its heritage for inspiration reflects a growing trend for a return to simple football values. Umbro is first and foremost a football company and have acknowledged the growing demand in the football boot market for more traditional looking and styled football boots.

There is an over abundance of multi-coloured, eye-catching football boots available, but not every player wants to pull a pair of bright pink or neon green boots out of his bag before stepping out onto the pitch.

Are you one of them or do you like the brash, in-your-face designs currently out there? Let me know by commenting below.