Tournament specialists Germany should cruise through this group and Croatia, even without their main goalscorer Eduardo, should have enough to tie up second spot. 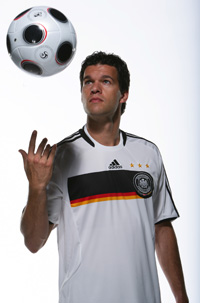 They are the bookmakers favourite to win Euro 2008 after qualifying in record breaking style. The Germans seem to have a knack of doing well in major tournaments and this year it looks like they should at least breeze into the semi finals.

Germany should win Group B, meaning they will play the runners up of Group A, likely to be an under strength Czech side, so semi finals beckon once again.

Since his injury in the first part of last season, Michael Ballack has returned to Chelsea in possibly the form of his career. With Bernd Schneider missing for the Germans, Ballack’s experience and influence will be key.

The other thing about the Germans is that they have not lost a penalty shoot out since 1976, a feature of the Germans that may become important come the semi final stages.

Forecast Group B Runner Up

Led by manager Slaven Bilic, a former Croatian international, the Croat’s qualified for Euro 2008 by topping their group and seeing off England.

Bilic has instilled a sense of belief into his side, who play a dynamic style of football. Their main striker Eduardo of Arsenal will be missing due to his horrific injury, so the Croatians will now be relying on an unproven at international level – Nikola Kalinic. Whilst not as prolific as Eduardo, the youngster has performed well at youth level, but he could be out of his depth if Croatia progress.

The Poles are playing in their first Euro competition, guided in by the legendary Dutch coach Leo Beenhakker, who famously took Trinidad & Tobago to the last World Cup.

Poland do not posses a single key player, but the likes of Artur Boruc in goal, Jacek Krzynowek in left midfield and captain striker Maciej Zurawski will need to be at their very best to even progress beyond the group stages.

Although on home turf, even the Austrians realise this side have little chance of doing anything in this tournament. In fact, there was talk about Austria not taking advantage of their automatic qualification, so as to avoid embarrassment.

Like Poland, this is their first exposure to the Euro’s. If they can get a result against the Pole’s, they will have done well.

Their captain Andreas Ivanschitz and goalkeeper Alex Manninger, formerly of Arsenal are the pick of the squad.