UK Chart-toppers Roll Deep were stars on and off the stage last week as they embarked on a mini university tour in partnership with Umbro and their new Umbro Vs. Range. 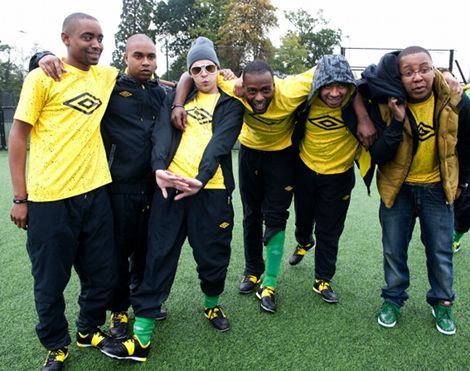 The Umbro Vs tour, visiting Reading on Thursday 14th October, Leeds on Friday 15th and Brunel on Saturday 16th, saw the London based grime act perform exclusive headline performances at each university.  But not before taking on three unsuspecting university football teams.

Fans were treated to a unique experience as the grime pioneers put in exceptional performances on the five a side pitch taking on some very good football teams.

Despite coming away with three defeats to strong Reading, Leeds and Brunel teams the band played with a high tempo, and were, in stages, unlucky not to come away with better results. Whilst the competition was fierce and tackles were flying in all over the pitch, the games were played in good spirits with a few moments of showboating from the band.

Flow Dan from Roll Deep commented: œTo be fair to the university teams they were much fitter than us so were able to last the pace. We™ve had a great time on the Umbro Vs tour and whilst our performances on the stage were better than on the pitch we™d be well up for a rematch against the universities sometime. It was a great experience.

Designed for the small-sided version of football the new Umbro Vs range is inspired by the culture clash between 5-a-side football and futsal.

Made up of striking t-shirts, jackets and football boots, the Umbro Vs range fuses style with performance “ it works just as well off the pitch as it does on it. So whether you™re about to take on your mates in a game of five-a-side, or go for a drink with them afterwards, the Umbro Vs range is the perfect product.

The range on sale in the UK features apparel in a black and yellow colour palette to represent Manchester, and footwear in greens and blues to reflect Sao Paulo.

Did you get the chance to play against Roll Deep last weekend? Let us know!