Argentine giants Boca Juniors played host to an all-new adidas Predator Lethal Zones colourway this week, as they took suffered a 3-0 defeat at the hands of Arsenal (no, not that one). 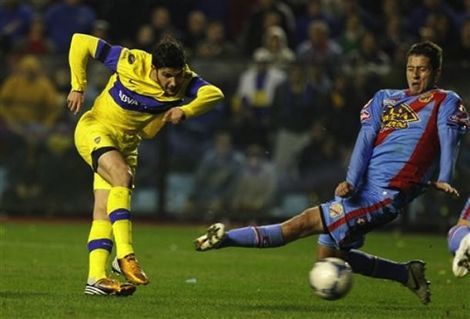 Likely to be dubbed Metallic Gold / White / Black, there’s a definite appeal to the aesthetic of this upcoming Predator LZ colourway.

Mixing the Gold fade through the boot into Black, with three White stripes in the heel definitely give these cleats a look that stands completely apart from the Bright Blue / Infrared launch colourway that’s currently doing the business at Euro 2012.

It’s not clear how or why Boca stars Nicholas Blandi and Pablo Mouche were wearing this particular Predator colourway ahead of their release, but we’re definitely looking forward to seeing them hit store shelves in the near future. 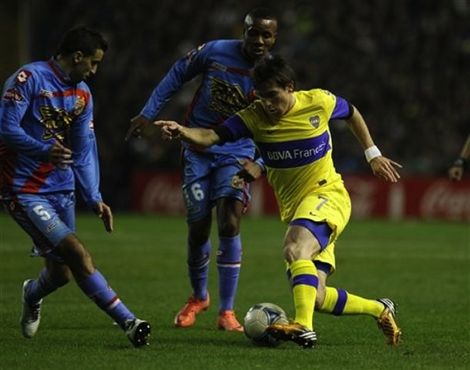 However, if there’s one colour synonymous with the Olympics, it would have to be Gold – and with this summer’s tournament set to be one of the most widely-publicised in Olympic history, we wouldn’t put it past adidas breaking these out for some of the Team GB stars in London this summer.

Whilst David Beckham’s current signature Predator Lethal Zones are designated ‘Olympic Pink’, it would definitely be uncharacteristic of adidas to miss the chance to put Goldenballs into a pair of Golden-boots (again) should he make the cut this summer.

The PR practically writes itself!

What do you think of this upcoming colourway?

Special Thanks to DDChile for sending in this awesome boot-spot!

Written By
Kyle Elliot
More from Kyle Elliot
FIFA will decide at a debate in March whether to ban Snoods...
Read More