In the second instalment of our goal line technology series, we look at the roadtesting of the new intelligent football at the FIFA Club World Cup, in an attempt to bring about a solution to the age old debate of whether the ball has crossed the goal-line.

The new Adidas Teamgeist II intelligent football has drawn a mixed response after being tested at the FIFA Club World Cup.

The football contains a microchip designed to alert the referee when it has crossed the goal-line, in an attempt to end goal-scoring disputes.

The system uses magnetic fields and a sensor attached to the inside of a football with a 12-point suspension system. Wires cut into the pitch around and behind the penalty area emit a magnetic field which, when data is fed to a central computer, can track the location of the ball and show whether a shot has crossed the line. An encrypted signal is sent to watches worn by the referee and match officials to indicate a goal.

A shot by Pachucha’s Gabriel Caballero in the Mexican teams’ 1-0 defeat to African champions Etoile Sportive du Sahel saw the system called into action for the first time. 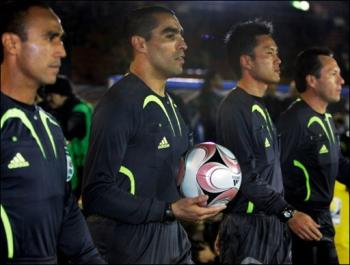 However players and coaches are divided over the quality the ball, with a number questioning its trajectory.

AC Milan coach Carlo Ancelotti said his players were generally pleased with the ball, although midfielder Clarence Seedorf said it was harder to control. “For various technical reasons we still have to get used to certain trajectories, but generally we are able to kick it well. This new ball is a little difficult to control, but when you hit it well it’s even more difficult for the keeper to grab it,” said the Dutch veteran.

Boca Juniors coach Miguel Angel Russo said one of his defenders, Hugo Ibarra, was not impressed. “Ibarra said that as he is not used to it, its trajectory changes,” Russo said. “If you use a new ball in such an important tournament, players have to put in a lot of effort to get used to it.”

The technology was first tested at the 2005 Under-17 World Cup, using radio transmissions to track the ball across the pitch, but was deemed inaccurate.

“It’s good. We did not notice any different particulars with regards to other Adidas balls,” said Ancelotti, whose team beat Boca 4-2 in the final. “It is has a good consistency and the trajectories are respected.”

Adidas’s reponse was to hail the new intelligent ball as a success. Adidas’s Head of FIFA Affairs Gunter Pfau commented: “Tests during the tournament’s opening matches show the system is working and football’s lawmakers must decide whether to approve the technology for wider use. Until now we are very satisfied. No ball was damaged, all the systems during the games worked and the players’ feedback here has been very positive.”

The International Football Association Board, which establishes the laws of football, says goal-line technology must be proven to be 100 percent accurate before its use in other tournaments, including the World Cup. Both companies declined to comment on the degree of accuracy shown by the tests.

Written By
Felipe
More from Felipe
Having seen his side thrash Villa, Rafael Benitez challenges his team to...
Read More