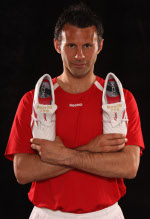 Ryan Giggs has been crowned as PFA Player of the Year for the first time.

Desapite a near two-decade long senior career at Old Trafford and a host of honours including 10 Premier League titles and 2 Champions League successes, the PFA honour had always eluded him.'  Giggs was naturally delighted saying:

It’s right up there with personal accolades – it’s the best to have as it’s voted by your fellow players.

I’ve been fortunate to win a lot of trophies, I won the young player award twice, but this is the big one.

It’s an exciting season. I think it is going to go right to the wire, there’s big game after big game now. That is what you want and need at a club like Manchester United.

Written By
Felipe
More from Felipe
Superstar Diego Maradona arrived in Scotland without his football boots. So, he...
Read More