We’re starting to think adidas are doing this on purpose. Another top-class player has been spotted training in an blacked-out pair of adidas football boots, and is this time it’s legendary Predator-wearer Steven Gerrard, it’s safe to presume that these are likely the new adidas Predator. 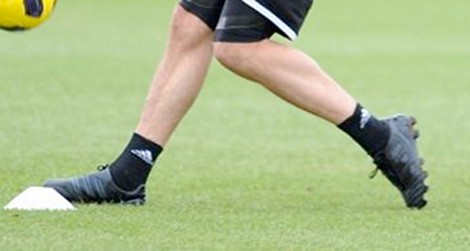 Training today at Melwood, the Liverpool skipper spent a lot of time working separately from the rest of the squad, meaning that some great photos got taken of him in his new adidas Predators.

We’ve heard plenty of rumours about the name, including the adidas Predator Kinetic, but so far adidas can neither confirm nor dent these rumours.

Either way, there’s a very distinctive 3 stripes on the outside of the boot, with a lighter coloured set on the instep. There’s nothing to indicate a flat ‘swerve zone’ like the Predator_X, so we can only presume that the 3 stripes on the instep are part of this version’s incarnation of the famous Predator technology.

An interesting point here is the Sole of Gerrard’s football boots – there’s definitely something towards the toe end of the boot. The odds are it’s a continuation of the PowerSpine that still splits professionals opinions on the Predator_X, but we can’t rule out a return to the PowerPulse element from the Predator Powerswerve!

Also, is it just us, or is that a really small footprint for a Predator? It looks incredibly narrow and light for a pair of ‘power’ football boots!

We can’t wait to see the new Predators, whether they’re called the Predator Kinetic or something else entirely – but all these black-out football boots are starting to feel like a hype-overload!

It’s all getting a bit too much for some of the Footy-Boots staffers, who are demanding to placed into a cryogenic sleep until the day the new Preds land!

We keep telling them that it’s not covered by the company health plan, and they’ll miss Christmas – but they’re having none of it…

These are easily the clearest shots we’ve seen of the new boots on a player yet – make sure you leave a comment and let us know what you think of them!

Big Thanks to community member and all around top-lad Jason W for emailing us this spot!

Written By
Kyle Elliot
More from Kyle Elliot
Barca battle for a point, Roy Returns and for some reason everyone's...
Read More