Steven Gerrard’s been causing a little bit of a stir for the past month or so with his Custom adidas Predator_X.

First impressions led many to believe it was a new colourway that the Liverpool skipper has been wearing of late – but the official word from adidas was that Gerrard’s been sporting a Miadidas pair of custom football boots.

And, thanks to our nifty little video above, you can see Kop hero Gerrard talking us through the choice of colours for each aspect of the football boots, and what it means to him.

Gerrard certainly puts a lot of thought into the design, and we’ve got to admit – we’ve never noticed the intricate Liverpool badge stitched into the heel section – pretty classy stuff, we’re sure you’ll agree!

Whilst it’s a shame that Gerrard never goes into a little more technical detail on why he loves his football boots – The most we get is Stevie explaining that it’s important to have the right studs for the right pitch – there’s certainly some candid moments about factors of the design, like Gerrard’s insistence that having his name laser-etched into the heel counter is so the Kit-Man knows whose boots they are; Whatever Stevie! 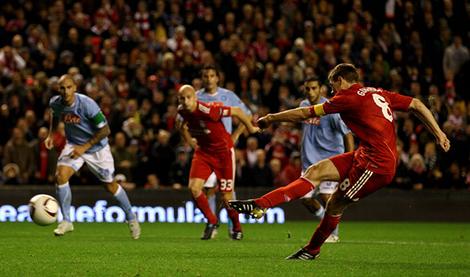 Gerrard stepped off the bench in his Miadidas football boots in the Europa League recently to bag a twelve minute hat-trick and see his beloved Liverpool overcome a determined Napoli side, so these may yet become his lucky boots!

The England Vice-captain has also been boot-spotted training in the new Black/White/Electricity Predator_X, so it will be very interesting see whether Gerrard will stick with his hat-trick scoring Miadidas football boots or switch into a brand new colourway for their big showdown with Chelsea this weekend.

If you’ve got a design in your head like Steven Gerrard, or just fancy a completely unique pair of football boots, then make sure you send us your designs.