Steven Gerrard needed protection from a local ‘fixer’ after threats were made by a gangster to shoot his legs. 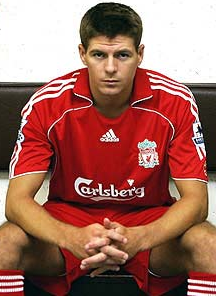 Steven Gerrard’s father has confirmed in a court letter, how a local gangster threatened to shoot the Liverpool and England star in the legs.

I would like to say that in 2001 my son Steven was being terrorised by a notorious Liverpool gangster known as ‘The Psycho’ who was threatening to maim my son by shooting him in the legs.

Also he was trying to extort a large amount of money from Steven. We immediately contacted the police and asked for protection.

This went on for a long time, during which Steven’s car was smashed up and the gangster chased him while he was driving home from training.

This was one of the worst times of our lives. It was really having a bad effect on his career. Liverpool FC provided security for Steven, but the threats still kept coming.

We were introduced by a friend to John Kinsella. I told him about the ongoing threats and violence. John then reassured me and my family he would resolve our nightmare.

From that point until this day we have never had any more problems from the Liverpool underworld. Steven and I have total respect for John for what he did for us.

Mark Kinslella, known as a ‘fixer’ is accused of taking part in a £41,000 raid in Grantham, Lincs. During the trial, he gave an example of what he does as an enforcer, using the Gerrard incident as an example.

He was demanding money and threatening to shoot Steven in the legs. He ambushed him outside his apartment in Southport. Steven was given armed police protection because they feared for his safety that much. I took steps. I told him to stop it. He followed my advice.

Written By
Felipe
More from Felipe
Nike’s Total Aerow Hi-Vis football is due to be used for the...
Read More