Manchester United took on Liverpool at Old Trafford this weekend in one of the most captivating games of the still-new 2010-11 Premier League Season.

However enthralling the game was it was Steven Gerrard’s adidas Predator_X‘s that really caught our eyes!

We spend the whole game trying to figure out what colourway the Liverpool Captain’s football boots were, before deciding that this is definitely a previously-unseen version of adidas’ Power boot.

Rather than being an unreleased colourway, we’ve got a suspicion that Gerrard’s Black/Gold/White Predators are a Mi Adidas creation, as we think we’ve created a pretty good mock-up. 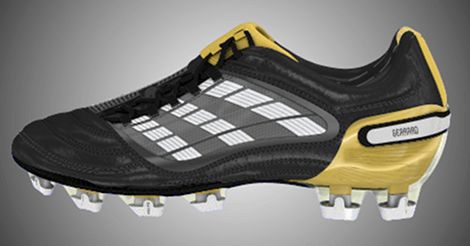 The gold heel counter and ‘tongue’ are definitely understated and unusual, but Gerrard’s design really seems to work with the black and gold – maybe when Gerrard retires adidas will offer him a job in their football boots design department!

The game itself was definitely a tale of two Predators as Gerrard bagged both of Liverpool’s goals, and Dimitar Berbatov’s sublime aerial hat-trick ensured that Manchester united grabbed all three points. 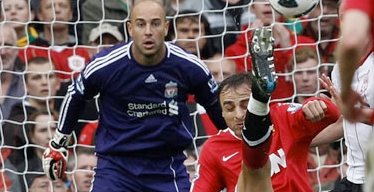 As you can see, as Berba executed a bicycle kick he inadvertently revealed that he’s yet another Manchester United player who prefers the soleplate of the old Predator PowerSwerve, just like his team-mates Anderson and Luis Antonio Valencia.

We’d love to know why so many professionals opt for the PowerSwerve soleplate – we’d hazard a guess that it’s something to do with either the 8-stud SG traxion configuration, or a preference for the older PowerPulse+ system over the new PowerSpine – but we’d love to know for sure!

Why do you think pro’s like Berbatov, Van Persie, Beckham and Xavi have been favouring the old Predator technology on their football boots?

Thanks to Footy-Boots Regular reader Ryan for helping us out on this one!

Written By
Kyle Elliot
More from Kyle Elliot
Check out the official Olympic change strip for Team GB at the...
Read More