An unfamiliar German side systematically took apart the 10-man Socceroos in Durban on Sunday night in the most comprehensive display from any team so far. 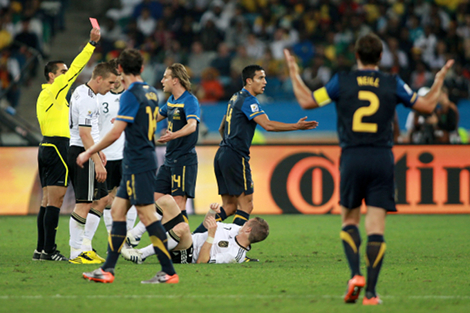 Germany and Australia started the match on somewhat even terms as the two powerful, physical sides exchanged possession rapidly, with Australia appearing to have the upper hand in the first minutes.

It all started to fall apart for the Aussies in the 7th minute, though, as Lucas Podolski found redemption from being frozen out of the Bayern Munich squad 18 months ago when he proved his adidas F50 adiZero football boots are as good for power as they are speed when he piledrived the ball inside Mark Schwarzer‘s near post.

It was only downhill from there as the Germans were in the ascension. Miroslav Klose the next to get his name on the scoresheet as he beat Mark Schwarzer to the punch with a towering header.

After the break things took a further nose-dive for the Socceroos when Tim Cahill was shown a harsh red card for a challenge on Podolski. Tomas Muller then completed the starting German front trio’s collection of goals when he finished coolly with an ‘in-off-the-post’ effort.

The Boys from Down Under’s misery was complete when Mesut Ozil – Nike’s German posterboy for the Mercurial Vapor Superfly II – cut the ball back across the box for Brazilian-Born Cacau to slot home.

The result sent a weighty message across the tournament to those who had written off the entirely-Bundesliga German 23. The vibe across the whole world has gone from laughing-off their Michael Ballack-less squad, to murmurs that we could have seen potential winners on the Durban pitch last night.