Footy Boots has secured the exclusive release of Nike’s Gattuso and The Sanchez Boys video viral before it launches anywhere else!

Following the Wayne Rooney and Torsten Frings Nike Total 90 Laser ‘Put It Where You Want It’ videos, you can see how Gennaro Gattuso gets on in his Sanchez Boys challenges, right now only on Footy Boots TV 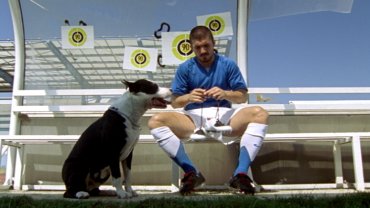 The Sanchez Boys discovered exactly how accurate and powerful Gattuso’s Nike Total 90 Laser football boots really are when they met him and his pit-bull dog at a local football pitch in Calabria in southern Italy.

‘Mr Gattuso’s Big Wheel Challenge’ : Gattuso fires shots at the Sanchez Boys who are stood at the top of a ramp. One-by-one, they ride inside a giant wheel and Gattuso must hit the wheel as it travels down the ramp. Gattuso immediately collects points when he hits the Sanchez Boys on his first attempt with his Total 90 Lasers. 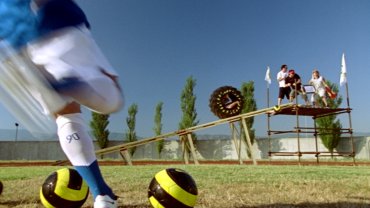 ‘Mr Gattuso’s Scooter Challenge’ : The Sanchez Boys have to get past Gattuso on a variety of vehicles without being hit by footballs being fired by Rino. Scooters, mini-bikes and an opera singer is involved!

‘Gattuso’s Pendulum Challenge’ : The Sanchez Boys are positioned in a moving device inside the goal and Gattuso has to hit specific targets whilst they are swinging from goal-post to goal-post. The Sanchez Boys end up on the floor and maximum points go to Gattuso.

Gattuso commented: “I have really had fun today with these 4 Englishmen. They are mad, in the sense that they let me do anything to them.

Written By
Felipe
More from Felipe
A top display by the man from Johannesburg wins him the weekly...
Read More