adidas are really spoiling us this week, after already spying Bayern Munich Skipper Philip Lahm in what could well be the new adiPure IV, Gareth Bale has shown up in another Black out pair of football boots – only this time I think we can unanimously agree that these are definitely some breed of adiZero. 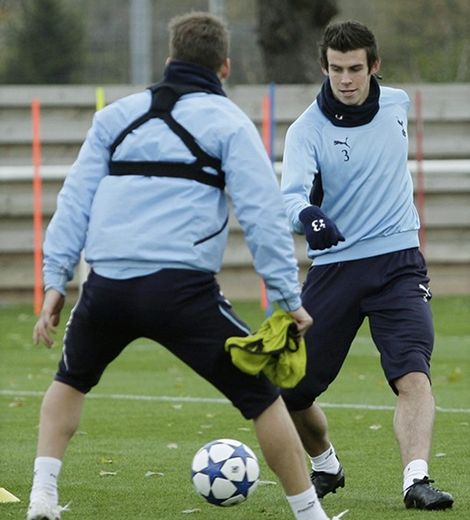 The Welsh Winger has long been an advocate of the F50 series, having worn them since joining Tottenham Hotspur in 2007, but adidas have recently made Bale more of a marquee name for the ultra-light football boots; no doubt thanks to his blistering form of late.

So, if adidas needed some feedback on a new incarnation of the adiZero – again, potentially the adiZero Prime – Bale would be pretty high on the list of players they’re likely to ask for testing.

But before we get ahead of ourselves here, let’s take a closer look at the boots themselves;

Firstly, the boot seems to be synthetic – on some of the close-ups you can see the smooth finish that’s missing on the leather version of the adiZero.

The studs on the boot seem to differ in shape across the boot, with the back ones being flatter and more blade like than the toe-end ones; but the quasi-triangular studs on the current adiZero often look unusual shapes due to the angles of how they are placed on the soleplate.

All in all, there’s very little here to suggest that these are any of the new forms of the adiZero, be it the'  adiZero Prime or, indeed, the adiZero II (which we’ve heard are two different boots, by the way…)

One clue is that the new shape of the adiZero Prime is rumoured to include a small tab on the tongue, rather than the more rounded tongue on the current range of adidas speed football boots – we’re struggling to make one out on any of these photos, but at least a couple of shots here seem to suggest it’s presence, even if we can’t quite confirm it with these photos.

But as always on Footy-Boots.com, it’s you who always chip in with the best theories and suggestions when it comes to black-out football boots!

So, if you think you’ve got a reason as to why Bale’s boots have gone into stealth mode, make sure you leave us something in the comments below!

Written By
Kyle Elliot
More from Kyle Elliot
Mizuno's Masatoshi Yamaguchi talks us through the development of the Morelia Neo...
Read More