When I was a lad, the best football boots cost £120 and the new models came out every two years.

There – that’s the complaint that pretty much inspired this article, and no doubt a few of you just wanted to validate that this was indeed the crux of the matter and leave (but don’t).

And whilst sounding like self-parody – and indeed might be a little rich coming from a site that promotes every new colourway under the sun – it is an indicator of how much the football boot marketplace has changed over the last few decades.

We spent the start of the summer celebrating the Nike Mercurial Vapor, and we are in amongst the twentieth anniversary of the adidas Predator, and it can’t be repeated enough how much these two boots changed the way sports equipment as a whole was designed and marketed.

But they’re not the only factors that have seen the industry grow into a higher-price, higher-frequency marketplace.

In it’s infancy, the adidas Predator still conformed to the £120-max price tag and a model every two years for major tournaments. But back then, the choices were limited; when there was the Predator Accelerator there was no F50; In the days of the Precision, there was no adiPure.

But in 2014, the economic life-cycle of a pair of football boots has grown with the game.

Before, football boots might only be seen as worth marketing around Christmas or a World Cup, but with footballers able to directly market products to millions of fans via Twitter, Facebook or Instagram (and that’s to same nothing of the tens of millions that follow Nike or adidas on social media) – every Champions League Final, el Clasico or Manchester derby has the potential to propel a new colourway or limited edition release.

The growing popularity of football as a sport and the power of social media has created an environment where football boots are on par with Triple-A video games; where plans are in place years beforehand to make sure there’s a new Battlefield, Call of Duty or Assassin’s Creed out at least once a year, just as there’s a new Predator, Mercurial or evoSPEED.

The simple truth of the world of football boots is that if you’re not releasing a new boot, giving it a glitzy launch, interviews with key players and putting a fresh run of ads in FourFourTwo, then someone else will.

This do-or-die need to innovate has created an environment where boots are constantly being improved or redesigned.

Now, there are certainly mis-steps when it comes to this breakneck pace of development; personally, boots like the Mercurial Vapor IX or Predator LZ II – not bad boots, but not changing the game; it’s no co-incidence these releases felt like filler, as they shared the summer with new statement releases; Hypervenom and Nitrocharge, respectively.

One of the main complaints we see is that these annual updates are a ‘rip-off’ and – with the price of boots now around £150 for a top-tier pair – some sort of marketing scam to have kids nag their parents into spending that once a year worthy of a Daily Mail headline. 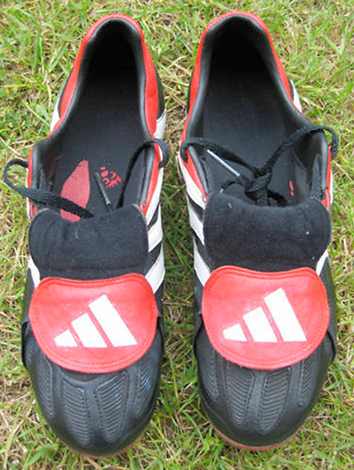 But the truth is, if you have a pair of football boots and are happy in them – a new model is only something you consider when you need them, or the appeal of something new is so great you have to have them.

If Ford or Vauxhall release a new version of a car, they’re not expecting all owners of the older model to rush out and buy them; just like boots, they’re there to appeal most to people already looking for a new model.

Where there used to be one person interested in buying football boots, there are new nine or ten – influenced by swelling participation figures for the sport and an increase in visibility of the product thanks to big-budget ads, and inescapable social media.

The danger is that these updates are so frequent, and so expensive, we might well have become conditioned to paying a little more for an update that’s actually significantly different.

Perhaps in the days when the changes in a boot’s design were as drastic as they were from the Predator Rapier to the Predator Touch or the Mercurial Vapor III to the IV, we might not be as willing part with an extra £70 for the Magista Obra vs. the CTR360 III.