After being one of the more successful international football teams in the last decade or so, there’s always plenty of anticipation when France step up to play on the big stage. 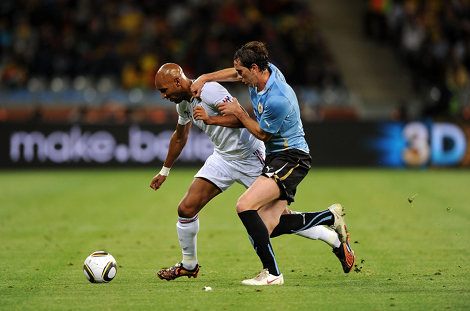 As the game on Friday night demonstrated, perhaps there might be a little too much is expected of Les Bleus as a resilient Uruguay forced them into a stalemate.

The best chances of the game fell to Sidney Govou in the early stages of the game, who spurned a golden chance during the opening exchanges. From there though, Uruguay grew in stature, with Athletico Hit-Man Diego Forlan forcing French Keeper Hugo Lloris into several good saves.

The South Americans soon found the wind knocked out of their sails as Midfielder Nicolas Lodeiro found himself sent off in the 81st minute after picking up a second yellow for a crude challenge on Arsenal‘s Bacary Sagna.

France, however, failed to make the most of this late advantage and the match ended in a unmemorable goalless draw.