It was billed as the battle of the pink boots – Bendtner’s Mercurial Vapor IV Berry’s versus the new Puma v1.08’s of Nicolas Anelka. But in the end, it was Adidas who came out on top at Stamford Bridge yesterday as Arsenal re-ignited the title race.

In truth, football boot colour was always going to be a minor talking point in West London.

A win for Chelsea and all the chat would be about the Gunners dreadful season, club in fighting and future of Arsene Wenger. Victory for Arsenal on the other hand would have the doom-mongers eating their words, the pressure transferred to Scolari, particularly after they lost their unbeaten home record recently to Liverpool, and Wenger’s boys up to 4th place in the table.

As it turned out, the latter scenario was played out down the Fulham Road with Robin van Persie in his new Adidas Predator Swerve’s grabbing two second half goals for the visitors after they had fallen behind to a Johan Djourou own goal. 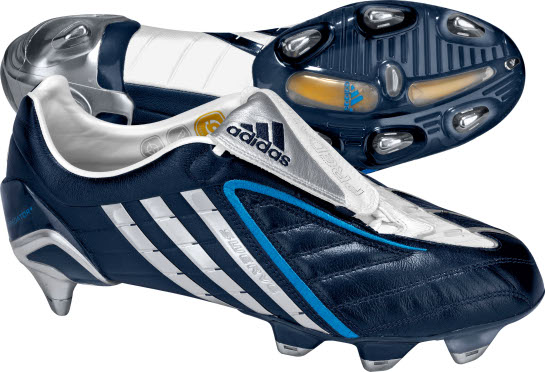 First the Dutchman smashed home a rare right foot shot on 59 minutes though he appeared to be in an offside position when he received the ball and then he grabbed the winner, guiding his effort past Cech after being set up by Emmanuel Adebayor.

It was a performance that delighted Wenger who said:

It was a fantastic win. We’ve had a bad period in the League and we were 1-0 down and still won.

There’s no better test of character. I told the team to keep the pace and last longer than they did and keep strong.

We can gain belief after beating Manchester United and now Chelsea away. That shows we have potential and character. We have now to be humble and come back tomorrow and do our job.

We need a referee that comes to Stamford Bridge who referees for both sides, not just for one.

Have you ever heard me speak about referees any time in the games I have been here? Never, in 15 in the Premier League, four in the Champions League, the Carling Cup, I have not said anything but today is different.

Offside or not, after all the attention Nike and Puma have had recently with their highly visible footwear, Adidas will doubtless be more than a little chuffed this morning that their classically styled, though technology filled new Swerve’s are grabbing all the headlines today.

Written By
Felipe
More from Felipe
Which football boot was selected as the boot of the year by...
Read More