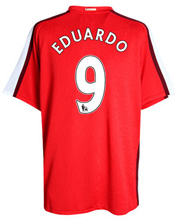 After seeing his fellow striker Carlos Vela opening the scoring against Burnely in their FA Cup tie with a delicious chip, Arsenal’s captain for the day Eduardo knew he’d have to come up with something special to rob the Mexican of all the headlines.

And the Croatian international, who suffered a broken leg in 2008, duly delivered, flashing home Alexandre Song’s cross with the outside of his left foot.

Eduardo’s strike put Arsenal 2 up and their victory was assured later in the second half when a Song back heel set up former Gunners boo-boy Emmanuel Eboue who rifled home a third.

Eduardo, who was playing in Nike Charcoal Mercurial Vapor IV’s when he scored, left the field on 71 minutes to a standing ovation as he was replaced by another Nike player, Theo Walcott.

The Arsenal manager Arsene Wenger was quick to praise his skipper saying:

I didn’t expect him to come back like that, it’s a tribute to his personality.

He’s never complained and that is a big example in our world.

It looked like a bit of a ‘beach’ goal – and he meant it, he sliced the ball.

Eduardo is a surprising finisher and an intelligent player. He has short back lift and understands what to do very quickly.

Goalscorers are moving in the box when everyone else is standing still, he has that.

I have never seen him do that before, his goal was instinct and shows you that finishing is all about what you do in a fraction of a second.

Arsenal will now play Hull City in the quarter finals with a semi final tie against Chelsea awaiting the winners.

Written By
Felipe
More from Felipe
Six football boots were nominated as being particularly outrageous, but which boot...
Read More