Anyone that was following on Twitter yesterday will know that we spent the afternoon with the lovely folks at Nike Football, 100 young hopefuls, a dozen top coaches, 8 Premier League Pro’s and two World Class managers!

Travelling down to London in the freezing January weather wasn’t a problem once we took to the pitches to see how the final 100 players in Nike’s global talent search had been going, as the pace and ferocity of the football on show really heated things up by a couple of degrees! Well, that and infinite cups of tea from the media area…!

Having watched professional matches and Premier League training sessions, we can safely say that we’ve never seen football played like it was being played at The Chance Finals. 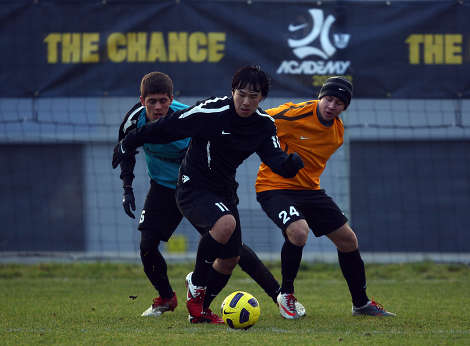 We started off watching an attack Vs. defence exercise being played out at a blistering pace among some of the African and Asian competitors – every touch, pass, strike and tackle was being played with ‘Cup-Final’ levels of grit and determination.

Whilst things were getting fiery on the pitch, it soon proved that even the press and spectators weren’t safe, as an errant shot nearly obliterated a nearby camera! 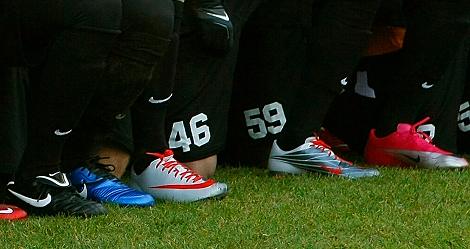 One thing we couldn’t help but notice was the Nike football boots on show! Whilst many players had the latest colourways and configurations, we noticed that many players were sporting White/Red/Black colourways we hadn’t seen before. 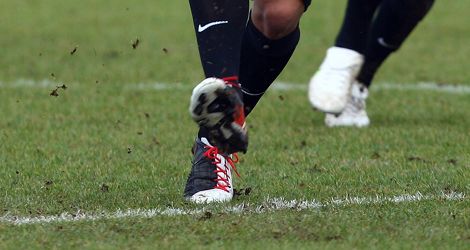 Nike told us that Theo Walcott had taken the time to design 4 special design for each of Nike’s football boots on NikeiD for the Chance finalists (all Arsenal colours, of course!) and we’ve got to say, they looked very sharp – especially the White/Red/Black Superfly II’s and Laser III’s!

Grateful to be a little further from the action, we took to a separate exercise, where we’d been tipped off that Guus Hiddink was about to take over from the Academy coaches. 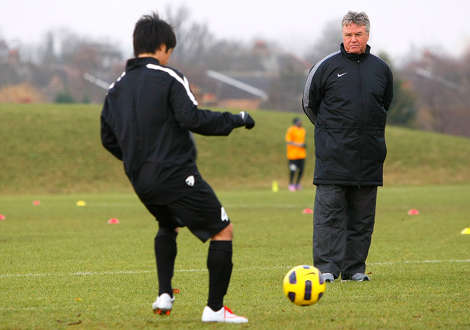 Sure enough, the magnanimous Dutchman appeared on the pitch to a flurry of activity from the Press and excitement from the players. Having coached the like of Real Madrid, Chelsea & PSV Eindhoven the current Turkey Supremo had everyone on the pitches attention, as he strode the touchline.

Just as it seemed that Hiddink’s presence had sent the action into Fever pitch, Arsenal tactician Arsene Wenger returned to see how the UK finalists were getting on, having hand-picked them at the UK finals last year! 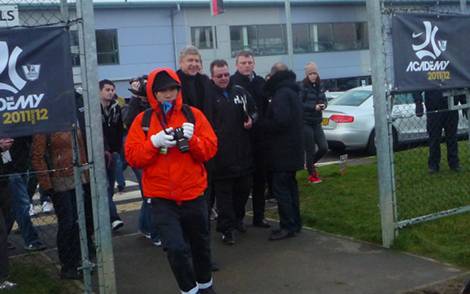 Wenger also assessed the standard of the rest of the competition, occasionally pausing to offer a nearby player some undoubtedly sagely advice.

Hiddink and Wenger then closed the day’s training by stopping for photos and chatting with the Final 100 (with one particularly muddy player giving the Highbury head honcho a hug he probably won’t soon forget!).

Nike then whisked us to a secret location outside of London, to have a chat with some of the players who would be giving the lucky 100 players some inspirational chatter later on. 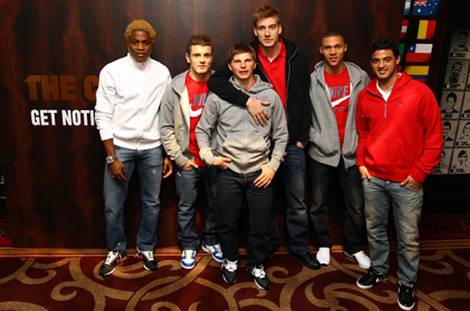 We chatted with Clint Dempsey, Nicklas Bendtner & Kieran Gibbs (which you’ll be able to read exclusively on Footy-Boots.com very soon!). The main tip from these pro players was how the Chance Finalists had to give everything they can over the next 48 hours.

We sat down at the dinner table with Nicklas Bendtner, who believes that ‘hard work’ will beat ‘lazy talent’ every time:

”Some guys have all the talent but aren˘€žËt prepared to work hard Ĺ› that won˘€žËt work.'  You have to be prepared to put the work in as well because it all depends how much you want it.'  You have to go for it with everything you have. 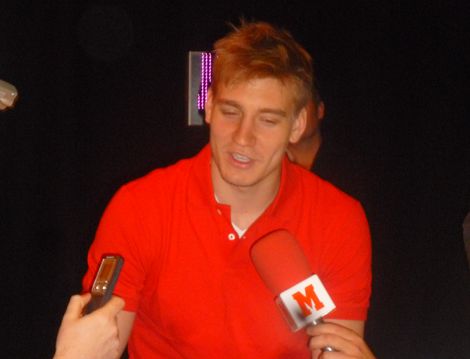 ”This is a great chance for the players to show off to some great coaches. If you want to live a dream, you have to chase it and be willing to put in the work.”

Nicklas’ team-mate Kieran Gibbs echoed his sentiments, saying ”From my experience, work hard and make the right sacrifices and hopefully you˘€žËll do it. My advice is to listen to the coaches and the people around you and work hard.”

Alex Song and Jack Wilshere both agreed that despite their different ages, backgrounds and amounts of facial hair The Chance is something they’d have loved when they were younger.

19 year old Wilshere said: ”This is a massive chance for them and it˘ every kid˘ dream Ĺ› it was my dream Ĺ› I was lucky enough to get into a Club but if I hadn˘€žËt, I˘€žËd have loved a chance like this and grabbed it.”

Cameroon midfielder Alex Song also compared it to his academy experience “This is a great thing by Nike Ĺ› when I was ten years old, I went to an Academy and I was lucky.'  Not everyone has that so this is a great opportunity.”

After some additional time with the players – including grabbing a few minutes with the UK finalists about which football boots they wear and why – we wrapped up our day at the Chance and wished all the Final 100 the best of luck for the rest of the weekend.

Stay tuned to the Nike Facebook Page to see who makes it down to the Final 8 and wins a place in the Nike Academy!