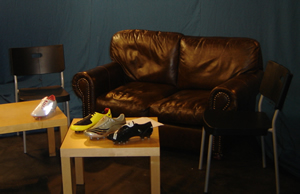 Filming for the Exclusive Footy-Boots Video Panel took place last week, and the sharp-eyed amongst you will note that on the table we had the Reebok Sprintfit, Nike Total 90 Laser, Adidas Tunit 50.7 Titan and the Umbro X Boot III football boots, all of which were prodded and poked by our panel of football legends who gave their honest opinions about each of the football boots.

Which football boot was named the “nightclub special”, which football boot left the panel seriously underwhelmed and which took the highest praise? The only way to find out, and to see exclusive video shots of the new and unreleased football boots in action, is to sign up for our videos and get the lowdown from the inside team.

Sign up with Footy-Boots Video Panel – we ask the questions, they tell us the score.

Written By
Felipe
More from Felipe
Fulham pull off a remarkable come back at Manchester City.
Read More