Recently, some of the team here at Footy-Boots.com were invited by our friends at Pringles to play in a 5-a-side tourney…

However, this was not your average kickabout.

If you’ve seen any of the crazy new Pringles ads with Peter Crouch and Nicolas Anelka, you’ll know that Pringles are all about the wild goal celebrations for this World Cup.

Re-branding for the Tournament as Prin-goooals! Extra points were awarded in each game for elaborate goal-scoring celebrations.

We caught up with him (After our glorious victory, we might add) to test his footballing credentials.

So, first question Paddy: Do you fancy yourself as a footballer?

I think we all do as football fans – We think “I’d give my right arm to do that as a job”!

I’m fortunate enough to have played at Anfield in front of a full house at a charity game, St James’ Park and Old trafford in a couple of weeks, and it’s great to do that – you know see things from a footballer’s point of view.

You know I was in the tunnel there and we were playing against the Liverpool Legends and you’re queing up alongside Robbie Fowler, Steve McManaman, Kenny Dalgleish and Bruce Grobbelar. And I’ve got Alan Hansen telling me that there’s the tradition of touching the plaque as we’re walking out and I’m thinking “Cor, Pinch me!”

And as an actual player – do you rate yourself?

I don’t think so, no! I’m alright at this level – you know I play once a week with my mates, where it’s pretty much like this (5-a-side)! 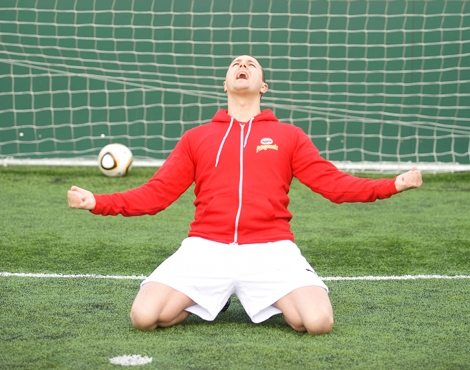 Back in 2005 you tested yourself against Wayne Rooney for a documentary: The outcome – do you think you’re a better player than him?

I think he just edged it – on the gingerness scale! But it’s funny, cos I did that documentary and you watch football and you don’t relise the level that they’re actually at.

I’ve been at the football many times and there’s always some bloke at the side of you – who’s about 20 stone – giving it: “Run you lazy so-and-so!”. And you’re thinking “Have a go at it yourself!!”

Football now, compared to the days of Bryan Robson, Gazza, drinking and all that – is fine – but nowadays it literally is a total different ball game.

So, you notice there is a huge difference between now and then?

Oh yes – there’s a massive difference, when you play with your mates or whathaveyou, everyone’s got a make who they think is a bit decent, you know like ‘he’s a decent player’, or ‘semi-pro’ but you look at players in the Premier League or who have  played in the Premier League- Robbie Savage aside – they are on a total different level. 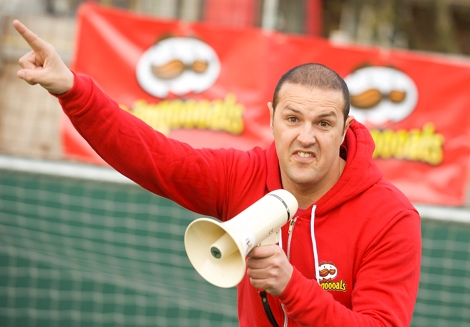 So when you play charity games, against ex or current Pro’s – how do you envisage you’ll perform?

Well – I don’t! Like I said- any of those games I just enjoy it. You have to think that there’s nothing to prove there, you’re no way you’re anywhere near the level that the players you’re sharing a pitch with are on, or have been on. I just enjoy it – I look around at the crowd, take it all in and enjoy it.

World Cup – do you think England can win it?

I’m like most fans – I think if we can get a good run going we’ll do well. But I don’t think anyone ever thinks we’re really going to do it. Having said that, individually, we’ve got World, World Class players. Like Wayne Rooney he’s one of the best in the World. Capello’s got them playing as a Unit, and if he can keep them that way then yeah – we’ve got a chance; a slim chance!

After all those scandels with John Terry and Ashley Cole, I think it rocked the boat a little bit but we’ll be right as rain.

Of the current squad – who’s your ideal England Captain?

Where will you be watching the games?

Me and mates have made a pact for this World Cup! If it’s two ants on a pitch with a football on it – we’ll be watching!

We’re gonna have a World Cup marathon, watch a couple of games down the pub for the atmosphere, but the England Games we’re going to go round people’s houses to watch so we can have a seat and all the rest of it! 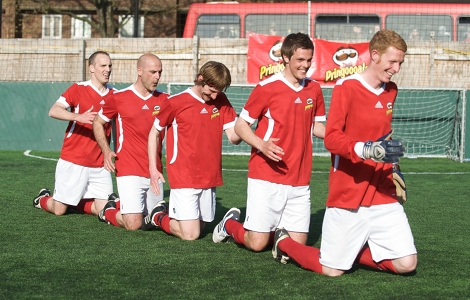 You’re about to do a competition for Pringles to find the best goal celebration – on the Footy-Boots Twitter we asked for people’s favourite celebrations of all time, which of these to you think is the best:

I think it has to be Gazza, just because  of everything around that game at the time, the Sun was out, I was watching it with my mates having a beer. I mean he’d just turned Hendry inside out and you just think that everything around it was fantastic and I’m gutted we never won that competition, but what can you do!

Thanks for the chat Paddy!

Paddy was helping out with the Pringles Cup – part of Pringles search for the ultimate Goal Celebration.

If you’re in and about London today – Paddy and the team are continuing the search at London’s SoHo theatre: check the Pringles Facebook Page for more details!

Written By
Kyle Elliot
More from Kyle Elliot
'Who Dares, Wins' is the motto of the Umbro GT Pro II...
Read More