While the arguments continue about the rights and wrongs of the British & Irish Lions rugby union tour to South Africa, the world of football has no such concerns at the end of a highly successful Confederations Cup tournament.

Fifa are trumpeting the 8 team event as a more than satisfactory warm-up event to next year’s World Cup finals, and certainly if the action next summer compares to what we’ve enjoyed over the past few weeks, then the 2010 World Cup will be one to remember.

First off, congratulations must go to the winners Brazil. In Sunday’s final they battled back from two goals down against the USA to take the trophy 3 – 2.

Playing in the Nike Superfly, Clint Dempsey (who has surely enhanced his reputation as a top level striker) put the USA ahead with Landon Donovan, in a classic pair of Nike Vapor IV’s, doubling their advantage before half time.

But, just as he did last week, Brazil striker Luis Fabiano banged in a brace wearing his Nike Superfly’s ,Kaka had a goal wrongly disallowed before Lucio in the adidas Predator Powerserve headed the winner as time ran out.

In the preceding game to settle 3rd and 4th place, there were two goal heroes for both Spain and South Africa with the Spanish eventually winning 3 – 2 after extra time.

Nike look like they could have another big name player on their hands in Katlego Mphela. The South African substitute opened the scoring in the second half, lashing in a cross from Siphiwe Tshabalala

Two goals in as many minutes from Daniel Guiza in the Diadora LX – K-Pro looked to have won the game for the European Champions but Mphela had other ideas, as he rammed home an injury time free kick to force extra time. 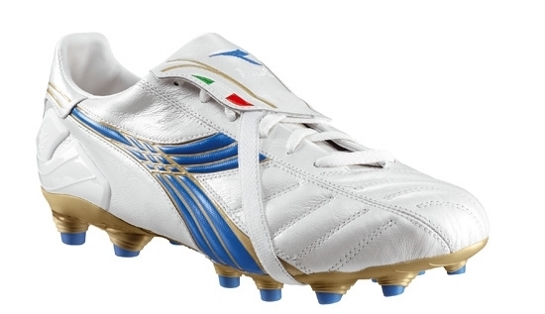 But just as adidas provided the winner in the final, so it did hear with Liverpool’s Xabi Alonso converting a free kick in his adiPure II’s to give Spain the victory.