Whenever Lionel Messi and Cristiano Ronaldo share a pitch, there’s always huge amounts of expectation. So, our good friends at Castrol have taken to their big book of stat’s to tell us whether or not that expectation is justified. 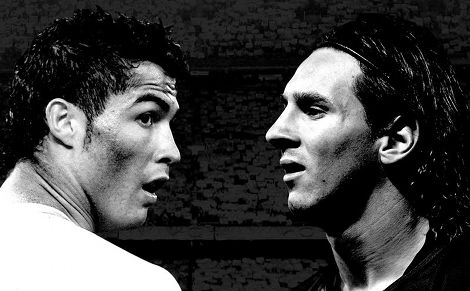 Due to meet in Geneva tonight in a Portugal vs Argentina Friendly, we’re presenting the two La Liga rivals statistics against one another in a head-to-head battle.

Despite being in red-hot form at the moment – Castrol Performance data shows that Cristiano Ronaldo has never scored or assisted a single goal when facing Lionel Messi in a competitive match, losing the last four in a row, whereas the Argentine star has scored twice and set up another two goals against his Portuguese counterpart.

The two players have met on six occasions – always at club level – and Messi has been on the winning side four times, whereas Ronaldo just once. To make matters worse for the Portuguese starlet, he has only seen his team score once when facing the 2009 & 2010 Ballon d˘€žËOr: a Paul Scholes goal at Old Trafford on 29th of April 2008 in the Champions League semi-final return leg.

The two players have both scored 24 league goals this term; however Lionel Messi has needed three games less to reach this tally. The two La Liga titans are hoping to break the all-time season-record of 38 goals, held by Telmo Zarra and Hugo SÄ‚Ë‡nchez. 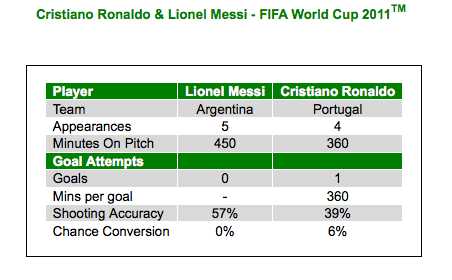 Both players seem to have put their disappointing World Cup campaigns behind them: Lionel Messi failed to find the net in South Africa last summer despite playing 450 minutes and firing 21 shots. While Ronaldo scored just once, in Portugal˘ 7-0 win against North Korea.
What do you think tonight’s result will be? Can Ronaldo break his duck against the Mercurial Messi?

Written By
Felipe
More from Felipe
After victory against Arsenal, Fergie looks forward to the next two games...
Read More