If there’s one thing that pundits here in the UK can’t seem to get their head around, it’s the use of the ‘Snood’ in the Winter football season. 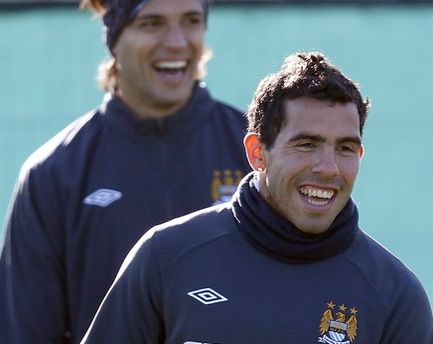 Described by fashionistas as the ‘combination of Scarf and Hood’, the Snood is the latest bit of gear designed to keep you warm on the pitch. Carlos Tevez brought attention to the garment this weekend after throwing his neck-warmer to the ground after scuffing a chance against Birmingham City this weekend.

For those of you who haven’t followed the rise of the quasi-scarf, the Snood seems to be following on from high-temperature baselayers and gloves in becoming the latest on-pitch accessory for players who really, really don’t like being cold.

And it’s not just players used to warmer climes that are opting for some neckwear either, as the coastal winds clearly became too much for Blackpool’s DJ Campbell, Bolton’s Bulgarian Martin Petrov and even Sunderland’s Scottish ‘keeper Craig Gordon becoming what are affectionately known in the Footy-Boots.com offices as ‘Snood Doggs’.

Arsenal Gaffer Arsene Wenger was recently quoted in a press conference as saying he doesn’t understand the trend, in fact claiming ‘In a period of Global Warming’ he finds the whole craze ‘quite amazing’. Clearly, Mr. Wenger isn’t too impressed – but given that his man-in-form Marouane Chamakh is one of the key perpetrators of the Snood we’re sure he’ll turn a blind eye to this fashion crime as long as the Moroccan keeps scoring. 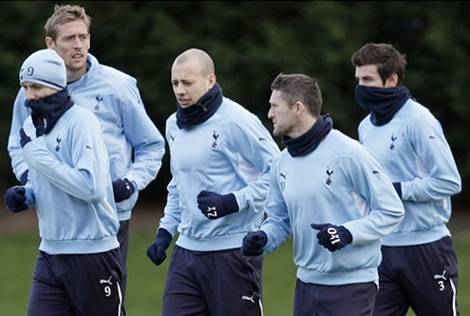 As usual, when Arsenal do one thing, rivals Tottenham will try and do something different – as you can see from this picture – it seems that Spurs stars are getting a Snood as part of their football training gear. Most players seem more than happy to throw their Snoods on along with their football boots on a morning, with the exception of Peter Crouch who, surely, must get the worst of the Arctic gales at his altitude!

We want to know what you think though, if it stops a player thinking about the cold and keeps his mind on the game, is that such a bad thing? Will anyone care about them in 2 weeks time? Will they be as accepted into the modern game, like pink football boots?

But then again, these players are paragons of fitness and physiology, surely when you’re charging about on the pitch for 90 minutes you shouldn’t need anything else to keep you warm!

Let us know what you think in our poll below, or leave your own Snood-tastic puns in our comments section! [poll id=”47″]

Written By
Kyle Elliot
More from Kyle Elliot
The unreleased White/Black/Vibrant Yellow CTR360 II has made a surprise appearence in...
Read More