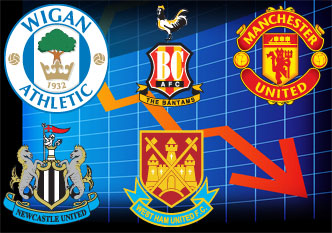 There are a few things in football that you wouldn’t want to be right now. Juande Ramos at Tottenham’s next board meeting, Rob Styles judging a penalty decision at the weekend, William Gallas defending Arsenal’s next corner, but top of the list must be having your name on the front of a football club’s shirt.

Football shirt sponsors are feeling the dramatic effects of the credit crunch right now. Traditionally, having a company brand on the front of a football shirt has been associated with prestige and success, but the recent trend seems to be saying the opposite.

Here’s a round-up of some of the major sponsorship concerns affecting football clubs in the UK.

Newcastle were he first club to see their sponsor struggle. Northern Rock had to be taken over by the UK government in February. Northern Rock (UK tax payers) will continue to sponsor Newcastle until 2010 to the tune of £5 million per year.

The XL Leisure Group went into administration in September 2008. They were one year into a three year deal as West Ham’s shirt sponsor, paying £2.5 million per year.

Man Utd’s sponsor AIG (American International Group) were ranked the 18th largest company in the world, but that didn’t stop AIG going the same way as Northern Rock and needing the US Government to bail them out with a loan of $85 billion. Man Utd have two years left on the sponsorship deal worth £56.5 million pounds.

Bradford City’s sponsor the Bradford and Bingley have also been nationalised with some assets sold to Spanish giant Santander. The sponsor has paid for this years sponsorship, but the football club will need to wait and see what happens for their final year of the deal which runs until the 2009/10 season.

Wigan Athletic sponsors JJB Sports have been warned over its ability to survive. The sporting goods retailer has seen the share price plummet by 60%.JJB’s sponsorship of the Wigan stadium and shirts ends at the close of this season.

Written By
Felipe
More from Felipe
England Manager Steve McClaren Under Fire, Under Pressure and Under Achieving Steven...
Read More