With clubs around the globe releasing their new shirts left, right and centre here’s a round-up of news from Italy, Turkey and England. 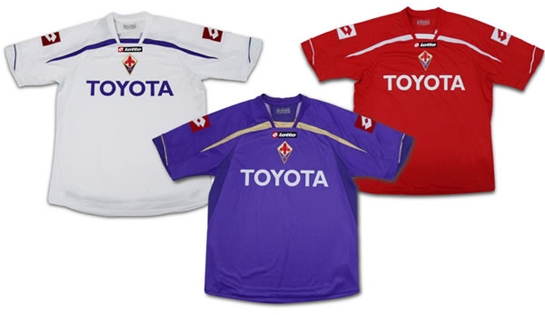 The new set of shirts for Fiorentina.

Beginning in Italy, Fiorentina have unveiled their new 09/10 kits made by Lotto. With the home shirt maintaining its purple tradition, it is surprising to know that, when the club was founded in 1926, the players wore red and white halved shirts derived from the colour of the city emblem. The more well-known and highly distinctive purple kit that remains to this day was adopted in 1928, giving rise to the nickname La Viola (“The Purple (team)”). Legend has it that Fiorentina got their purple kit by mistake after an accident washing the old red and white coloured kits in the river.

The away kit in contrast has always been predominantly white, sometimes with purple and red elements, which do indeed feature in the new design. Whilst Fiorentina’s third kit has altered in shade and design, the red shirt which reappears this coming season has been the most worn third shirt by Fiorentina, interrupted by yellow shirts (’97-’98 and ’99-’00) and a sterling version, mostly during the Coppa Italia, in 2000-01.

Bari’s home and away shirts for the new campaign.

Remaining in the European nation, AS Bari have unveiled their new 09/10 home and away football shirts made by Errea. Following the foundation of the club in 1908 the players wore red shirts with white shorts when they would play against English sailors at the San Lorenzo field in the San Pasquale area of Bari, however 101 years on the home shirt is now coloured white, with red being used for the away shirt. 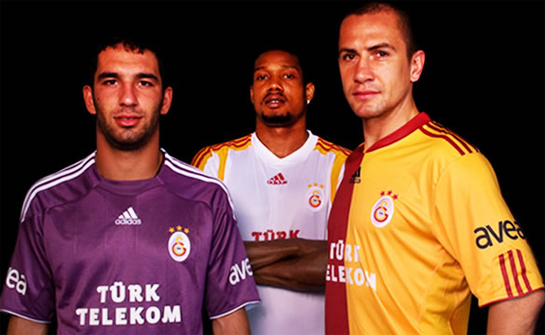 Meanwhile in Turkey both Galatasaray and Fenerbahce released their new shirts. Speaking at the launch of the new Adidas kits, Galatasaray Technical Director Frank Rijkaard said: “I’m very happy with Galatasaray. We’re starting a new season with a new uniform and with very good form, so I think we will be very successful”. 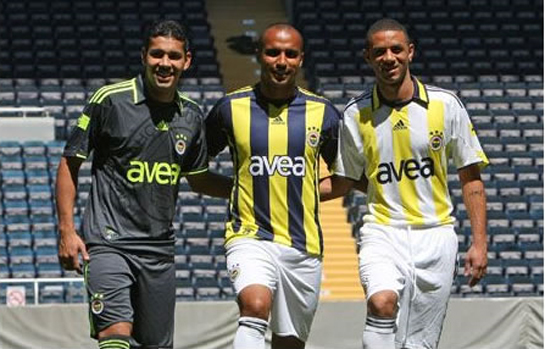 Whilst the new Adidas Fenerbahce kits, unveiled at the Fenerbahce SÄ‚Ä˝krÄ‚Ä˝ Saracoglu Stadium, comprise of a new yellow-white striped away shirt and a catchy navy shirt to add to the new striped home design, the legendary shirt synonymous with Fenerbahce. 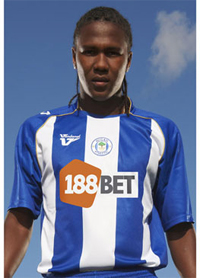 In England, shirt releases have been non-stop with Manchester United, Manchester City and Chelsea leading the way. Whilst Wigan Athletic have followed in suit by unveiling their very own 09/10 away kit, made by Vandanel and if the club’s future is as bright as the garment itself, supporters will have no complaints this season! The kit is modelled on one of the best teams ever to grace a football pitch, the 1978 Dutch side who took the world by storm with their total football. 1978 is of course the year that the Latics claimed their place in the Football League and following a meteoric rise, look forward to a bright future in the Club’s forthcoming Barclays Premier League season. The retro kit manufactured by technical kit partner Vandanel, features Club Principal Sponsor 188BET and a unique sleeve design.

Mario Melchiot, Club Captain and Dutch international, welcomes the new kit as homage to the two great events in 1978, “It’s a nice design and obviously players like Daniel (de Ridder) and myself will appreciate the reference it also holds to such a great team. The new manager we have certainly values the importance of keeping possession and working our way around teams so hopefully it’ll have a positive influence on us.”

Paul Hunt Commercial Director comments, “It was an unenviable task to follow the new home kit but Vandanel have delivered the Club another quality kit. I am sure it will be a favourite with the fans and will certainly brighten up the new Club Shop!”

For all the latest shirt news, visit FootballShirtCulture.com

Written By
Alan
More from Alan
Redknapp admits he will 'severely' punish the Tottenham players who flew to...
Read More