Notts County may have caused mass media interest recently due to the appointment of former England boss Sven-Goran Eriksson as Director of Football, yet it is their new football shirt sponsorship deal we are focusing on. County announced that it has signed an agreement with Nike to be the club’s kit supplier after ending their deal with Vandanel last week.

Medoc, the Nottingham-based technology solutions company has also been confirmed as the home shirt sponsor. Medoc sponsored the Notts County FC Centre of Excellence last year, and was shirt sponsor to the Club between 2006 and 2008.

The new Notts County FC 09/10 strip was worn for the first time by the team in their season opener against Bradford City at Meadow Lane over the weekend, in which the team demonstrated why they are tipped for promotion.

The official launch of the kit will be on Friday 21 August, when the replica kits go on sale in the Club Shop and Online.

Commenting on the agreement, Peter Trembling, Executive Chairman of Notts County FC, said: “We are delighted to announce this agreement with a manufacturer of the calibre of Nike.This underlines further our ambitions to develop Notts County and its brand internationally, by signing with a global manufacturer who works with the footballing elite day-to-day.” 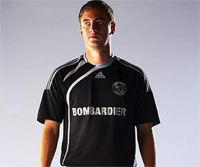 Local rivals Derby County have unveiled the Rams new 09/10 away kit made by Adidas.

Hundreds gathered at the Westfield Centre to see Rams goalkeeper Stephen Bywater, defender Miles Addison and midfielder Robbie Savage model the new kit which is available to buy now. Last month the Rams unveiled their new home kit for the 2009-10 campaign but they will keep their third strip, featuring blue and white stripes, which was used last season in their first full season under the guidance of Nigel Clough. 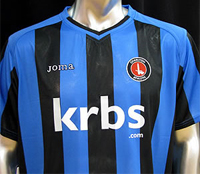 Elsewhere in the Football League, Charlton Athletic have revealed their new blue and black striped away kit for the 2009/10 campaign, which went on sale for the first time before the start of the season last Saturday.

And with stocks of the new red home kit again running low following a high number of sales, supporters were be able to purchase the new away jerseys for the first time last weekend.

Charlton retail manager Michael Rea said: “Given how late in the summer we finalised the new sponsorship deal with Kent Reliance Building Society, we’re really pleased to be able to have launched both new kits before the start of the season.

“Despite the delivery problems, sales have been really good for the red home shirts, and we’re expecting the away kit to be just as popular.”

The away kit, which features black shorts and black socks with a blue band around the top, is reminiscent of the seahawk and blue denim away kit that the Addicks wore two seasons ago.

“The seahawk and denim kit was one of the most sought after kits in recent years, so we’re urging supporters who want to get their hands on the away kit to purchase it as early as possible,” added Rea.

For all news with regards to football shirts visit FootballShirtCulture.com

Written By
Felipe
More from Felipe
John Terry has called on his side to continue improving over the...
Read More