It’s that time of year again for the brains at Deloitte to reveal who’s topped the Football Money League at the end of the 2011-12 season – and Real Madrid are once again at the top of the heap. 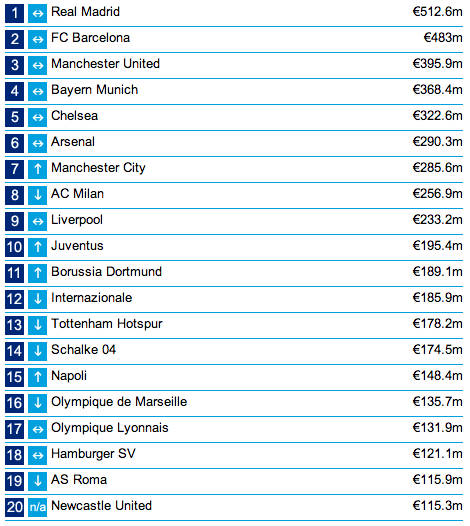 Los Blancos of Madrid not only hold on to their place at the zenith of world club football, but remarkably have improved on their earning from the end of 2011, becoming the first sports club to surpass the €500m revenue threshold in a single year!

Despite the Champions League title eluding them once more, the Spanish titans did claim the La Liga title and negotiate renewed kit deal with adidas, extending their position as technical supplier until the end of the 2019/20 season.

This has increased the gap between Los Merengues and arch-rivals Barcelona, who also enjoyed an increase on the previous season thanks to the club’s brand expanding around the world, and a new Qatar Airways shirt sponsorship deal being negotiated – due for commencement in the 2013/14 season. 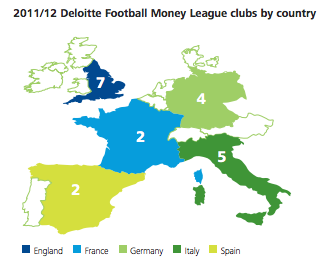 Whilst the Spanish giants have once again dominated the top two spots, English clubs can celebrate a bumper year, dominating the top 20 places with 7 teams.

Manchester United’s new deal with Chervolet – the biggest sponsorship of it’s kind in world football – keeps them comfortably out of the reach of Chelsea, Aresenal, Liverpool, and arch-rivals Manchester City, who enter the top 10 for the first time. 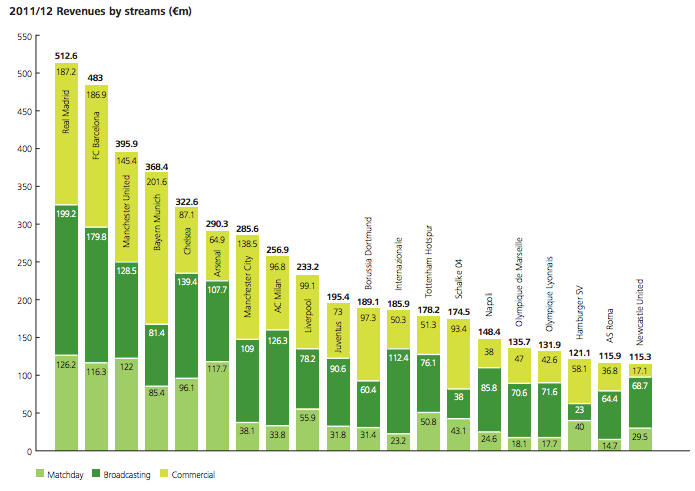 Earnings broken down by source (Click for a bigger version)

Whilst Inter Milan drop out of the top 10 for the first time, Italian football has a good showing in the 2013 rankings, despite another year underpinned by scandal.

Juventus’ incredible unbeaten streak seems them creep back into the top 10, whilst Napoli’s failure to secure Champions League football for the 2012-13 season could see them drop from next year’s league.

German football once again shows the power of self-sustaining football in a league that seems to go from strength-to-strength, with everyone’s second-favourite club – Borussia Dortmund – a contender for a top 10 spot next season.

Any surprise inclusions or exclusions this year?  If you want to compare to last year – be sure to check out the 2012 league, here!

Written By
Kyle Elliot
More from Kyle Elliot
We talk to one of the progenitors of flash football boots, and...
Read More