“Keep changing the kit”, that’s what football fans voted in our poll to find out how often fans would like football clubs to change their football kits. 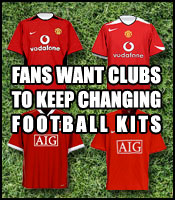 Replacing football kits annually topped the list with 43% of the votes ahead of a bi-annual change (41%).

The poll conducted here on Footy Boots had 1,000 votes with the following results:

Of the 20 teams in the Premier League this season, just two teams will be keeping their home shirts from last year, Manchester United and Newcastle United.

The trend for clubs to change their football kits regularly is well received by fans, despite protests suggesting that football clubs are taking advantage of their supporters.

Football clubs have been taking a bit of stick for releasing football shirts so frequently, so we wanted to see what our vistors had to say. It’s pretty clear that they appreciate new merchandise being released regularly.

Written By
Felipe
More from Felipe
The PUMA v1.10 makes its on pitch debut in the UK and...
Read More