Footy Boots recently visited Nike’s World HQ in Portland, Oregon (USA) to take a behind the scenes look at the Nike Global Football Department. In our third and final part of the series we visit the Nike Sports Research Lab.

Never before opened to non Nike employees, Footy Boots was welcomed into Nike’s highly classified Sports Research Lab by Senior Researcher Erez Morag, the man responsible for putting the likes of Wayne Rooney, Cristiano Ronaldo, Alexandre Pato, and Ronaldinho, through their paces in the pursuit of creating the perfect football boot. The Sports Research Lab is a closely guarded secret in the football boot world, existing to help understand the needs of the athletes and the demands of the game to subsequently apply the acquired knowledge to the making of ground breaking, innovative football products.

Before Nike launches a new football boot to market, Erez and his staff will identify a range of critical skills for analysis in order to allow the football boot brand to create a boot for the individual player both at a professional and amateur level. 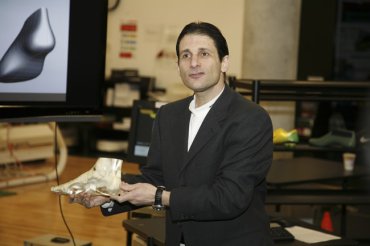 Initially, feedback will be gathered from players, doctors, researchers, and trainers, to determine which elements should be applied to the latest football boot model. The SRL will also conduct in depth analysis of player movements during football matches in order to understand the products that would most benefit a player throughout the full ninety minutes of a match. Erez’s studies found that the most frequent player movements during a match were acceleration (58%) and passing (20%). Nike will undertake a biomechanical analysis of its individual athletes on the training pitch and in the Sports Research Lab, allowing them to work both with and without the ball, to ascertain their own acceleration patterns and other typical game movements. Once Nike understands what the player wants and what the modern game demands, the new football boot will be tailored to suit. Certainly we can see in the construction of the Mercurial Vapor 4, the reduction of the overall weight of the boot through the use of lightweight carbon fibre and a streamline boot shape, combined with innovative traction concepts and functional plate characteristics to prevent foot slippage, allows the likes of Cristiano Ronaldo, Gabriel Agbonlahor, and Aaron Lennon to accelerate away from opposition defenders with relative ease. 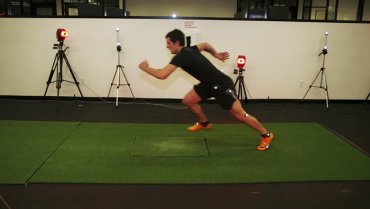 As football boot consumers we demand the perfect product to help improve our game, often neglecting the behind the scenes work that goes into achieving the finished article. Following our visit to the SRL, Footy Boots found it highly refreshing to see at first hand the amount of analytical studies that Nike puts into perfecting each new football boot model, before it adorns the feet of the world’s leading footballers and Sunday league players alike.

Written By
Felipe
More from Felipe
Due to launch in the UK in just a few days time,...
Read More