Even though it was only released yesterday – Footy-Boots.com have been trialling adidas’ newest model for some time time now. Here’s our thoughts on the lightest football boot to date!

Looking at the f50 adiZero – I was filled with a sense of dread. It’s a speed boot, which usually means blistered heels. And one of it’s other main selling point is it’s single-layer construction. What that usually means is it’s going to crease up and rub just about everywhere else on the foot too.

How wrong that turned out to be! adidas can give themselves a serious pat on the back for the fit of this football boot. For your average sized foot, these boots have an outstanding fit. Straight out of the box, these boots were not only wearable, but also comfortable and flexible. 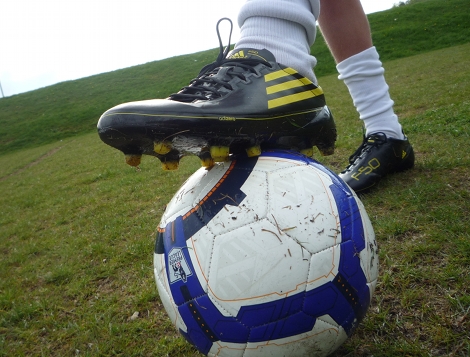 Starting externally – the lacing system might not look particularly elegant, but this is actually one of the reasons for the f50 adiZero’s success. The wide channel for the laces means you can adjust the fit of the boot without worrying about making the surface of the boot uneven.

Another excellent feature of the fit is the cut of the boot itself -, particularly around the ankle. adidas have opted for a high front and heel to the boot – presumably to enhance stability -‘  but unlike some other boots that have tried this, the shape of the f50 adiZero curves around the heel and dips under the ankle, which prevents any rubbing in those areas.

Another nice feature is the choice by adidas to include two optional insoles, for your own preference of Ultralight or Comfort. I’m not going to go into great detail on each of them; Ultralight is dotted with tiny holes to decrease weight and improve ventilation. Comfort has foam padding. The Comfort sole is still plenty light, and the Ultralight isn’t really uncomfortable.

So there’s not really anything to choose between the two – however, if you have knee or ankle issues opting for the Comfort sole might save you any further aggravation on very hard ground.

My only worry in this department would be for players with very wide feet. Whilst I definitely think that the lacing system is capable of accommodating people with quite-wide feet or people who wear two pairs of socks; if you’ve had problems with boots being too tight and narrow before, I doubt this boot will be any different 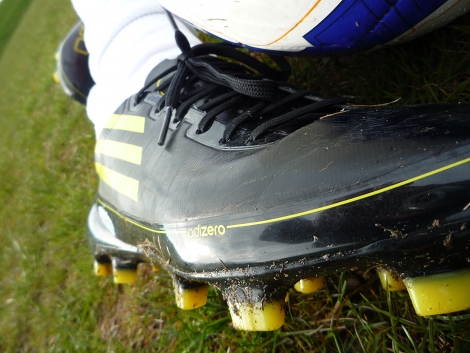 One main issue that people have taken with pictures of the f50 adiZero is that it looks – well – kind of flimsy, and I can see why.

The good news is that the boot is actually quite solid for two reasons: First is the construction. The adiZero has no proper sockliner to speak of, no two-piece outsole, no swerve zones or rubber panels and so on.

The football boot is literally an upper, a sole and some laces (Okay, there’s a TPU bottom-frame and interchangeable insoles, but you get the idea) which means that there’s actually very little that can go wrong on the boot. 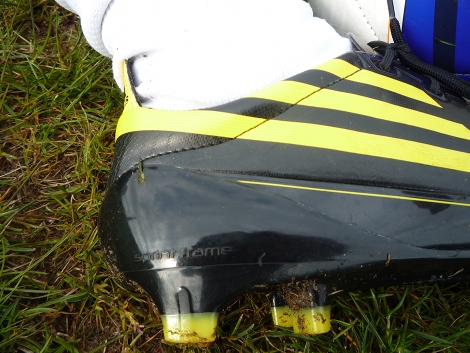 The heel counter forms from the soleplate, which means that as well as being as tough and solid as the bottom of the boot it is also impossible for it to come away from the upper unless the whole sole does.

The second is the choice of material. The SprintSkin used on the Upper is actually very tough. It seems to be made from a single piece, as well as just being a single layer, which means there’s nowhere for any stitching to come loose. 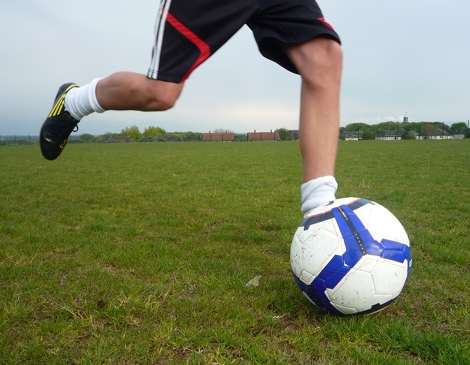 This was always going to be an interesting section to write – as without the ball the adidas f50 adiZero feels like just about nothing!

The boot is comfortable and unintrusive, and I don’t need to tell you all how light it is!

With the ball, I did have some issues with the SprintSkin. Having played almost exclusively in leather boots for the past few months, it did take a little while to get into the ‘feel’ of the more frictionless SprintSkin of these football boots. But I imagine anyone that’s been playing in any of the old f50 models will feel right at home in this new model.

Striking and passing the ball is remarkably standard in these boots – the side-offset lacing gives a nice big area to hit the ball with when passing and crossing, and thanks to the boot’s laces extending a fair way down the boot you do get a nice snug fit around the instep for receiving and distributing passes. 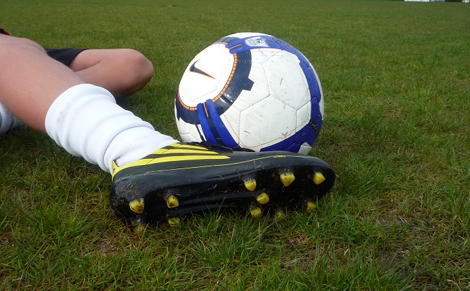 Another worthy note is the sole plate. The f50 adiZero features some very unorthodox shaped studs, they’re very narrow and angular which makes them great for gripping into the ground.

Whilst slightly longer than many other FG studs are nowadays (You wouldn’t get away with wearing these on artificial ground like you would many other FG boots) the smaller surface area for each stud means that your weight is distributed to a smaller, narrower point (like running track spikes) which makes shifting and changing weight whilst running more efficient in these football boots. 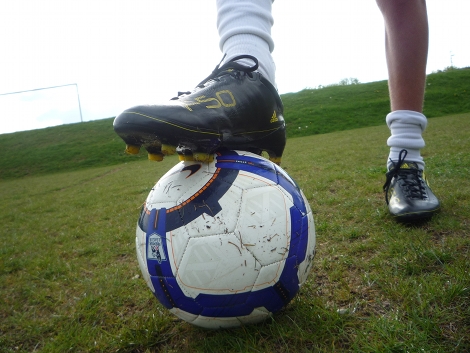 adidas have made an excellent boot in the f50 adiZero. In a similar vein to the Nike Superfly II, at its core, it’s a simple concept for a boot: No swerve zones, no power-enhancing technology, no protection zones.

Whereas Nike offered acceleration-enhancing technology at the sacrifice of having the boot carry more weight; adidas have left the boot completely luxury-free to make the boot as light as it possibly can be.

Passing and shooting isn’t something that you’ll feel any benefit in, and the boots don’t offer anything groundbreaking in the way of foot-protection (although it is sturdier than you think it might be).

What the boot does give, though, is that unbelievable feeling of lightness. Running off the ball, or knocking a ball past the opposition and sprinting onto it has simply never felt so satisfying.

If you’re a confidence player, who thrives on having a mental edge in the department of speed – you’re going to love the adidas f50 adiZero. The complete lack of weight will encourage you to chase down lost causes as long as you’re on the pitch, and the sense of agility that they give you will make you want to go out in the garden and practice your stepovers and 360-turns until your legs drop off.

For everyone else, I’m not going to convince you that a few extra grammes will make any difference to your game. What I will say, is that it’s a great gimmick-free boot that’s hard wearing and comfortable, as long as you can put up with the more frictionless upper that comes part and parcel with the SprintSkin you’re probably going to enjoy this regardless of how much it weighs.