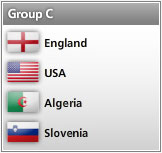 Slovenia deserved their place at the World Cup Finals after their qualification progress. After coming runner up in their group at the expense of the likes of Czech Republic and Poland they then faced Russia in a play off to progress. As clear favourites Russia went two goals up at home before a late away goal proved decisive for Slovenia. In the second leg Slovenia scored a solitary goal which was enough to overcome the mighty Russians.

Slovenia don’t have any stand out players, but they play well as a unit. Being the smallest nation at South Africa, team spirit will need to be high for them to prgress into the knockout rounds.

Samir Handanovic of Udinese between the sticks is solid and Jose Mourinho rates Inter’s towering midfielder Rene Krhin, which can’t be bad thing!

Matjaz Kek is highly popular in Slovenia following their qualification to South Africa. Kek the manager has set his side out to be organised and functional.  It will be 4-4-2, based on a tight defence that conceded only four goals in 10 group games!