So here we are. On day one of a brand new decade, Footy Boots can present our favourite five football boots from the last 10 years.'

We limited ourselves to choosing only 4 boots from our ‘top’ brand plus a maximum of 3 from any others. And, just to make things a little bit more difficult, we could only select one football boot from any single range.

It is, of course, a hugely subjective list so please feel free to comment below and lets us know which football boots you would have gone for. To help with your choices, here are our previous picks…

Football Boots of the Decade 20-16

Football Boots of the Decade 15-11

Football Boots of the Decade 10-6

Whilst it didn’t make too many radical changes over the original, it was more refined. Addition of a KNG-100 Upper on the top-end models was a big step towards embracing synthetic uppers for Nike. It will be remembered in the classic Blue, Black and White colourway that Luis Figo wore at WC2002.

Side offset lacing was, at the time, very unorthodox – but look around you now and every major brand has at least one side-offset lacing boot in their silo.

The new Speciali was exactly what Umbro had desperately craved for the best part of 5 years. Giving in to temptation, Umbro had allowed some of the scraps of technology from it’s slowly bloating X-Boot range to ‘taint’ the Speciali – making it something it should never have been, in an attempt to steal fans from the Predator & Total 90 ranges.

After losing its retro appeal and classic styling, even looking at the Speciali left you with a certain uneasy feeling that only crops up from time to time, like when Gordon Brown proclaimed his love of the Arctic Monkeys, or just Rod Stewart in general. Clearly taking cues from Fabio Capello’s design notions for the New England home shirt Umbro ‘reset’ the Speciali back to the boot it was always meant to be – and seeing the glorious White and Red version on the feet of John Terry left me feeling that some great injustice had been undone in the world.

Most of the time a classic should just be left alone, like the late 90’s remake of Hitchcock’s ‘Psycho’ or Britney Spears covering Satisfaction by the Rolling Stones. But every so often, someone comes along who’s willing to put the same time and care into the new version as those who had gone before into the old. 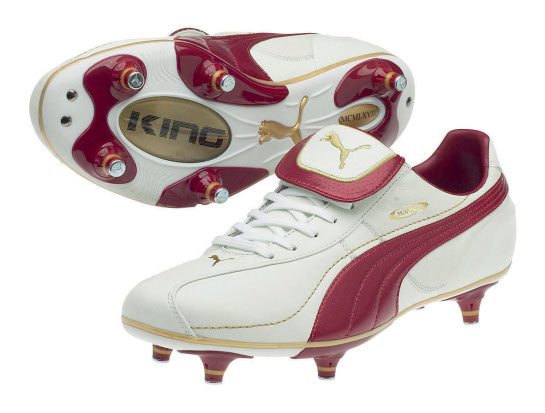 Streamlining the King by removing some of the unnecessary panels, increasing it’s appeal with some of the softest leather ever to grace a boot and adding a robust (yet subtle) heel guard was exactly what the brand needed to continue it’s legacy – and ensure another generation of legends could wear the King.

Barely makes it onto the list as it was launched in the early noughties. For me, it was the first boot since the original Predator that had the ‘talk of the schoolyard’ factor. Everyone wanted Ronaldo’s boots, with the R9 behind the tongue – even though Brazil didn’t feature in any major tournament to showcase them – somehow they were the boots on everyone’s mind. 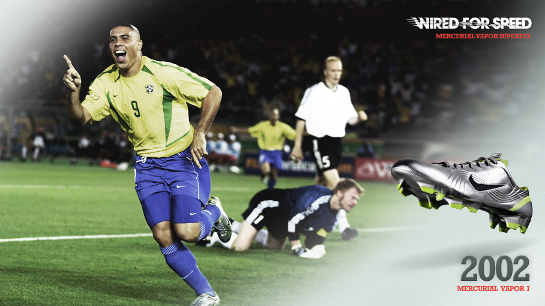 Also backed by Nike’s best Viral Ad (in my opinion) – The Cage! Adding to the collective tongue wagging of the public was the fact that you only caught the slightest glimpse of the boot at the end of the ad. Awesome.

If that World Cup qualifier was David Beckham’s launchpad to superstardom – these boots were the rockets that propelled him. The Precisions were awesome looking boots, futuristic and fearsome – the low-profile accentuated by a velcro down tongue (the first time the tongue could ever be held in place in the range outside of some creative lace-taping or your girlfriend’s hair bobble). 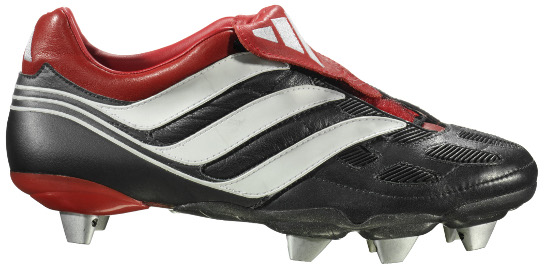 Whilst the X-Traxion studs a huge bonus to the boot – and an innovation that has held true for a decade now – arguably the best thing about the sole plate was that adidas had dropped the creepy-looking flesh-coloured sole plate from the Accelerators!

So that’s it. Our top 5. Let the debate and the arguments begin! In the meantime, everyone at Footy Boots wishes you all a very happy and prosperous New Year.

Written By
Felipe
More from Felipe
David Beckham has revealed that he has a clause in his contract...
Read More