Robbie was personalising his own Nike Total 90 Laser football boots at the Nike iD Studio on London’s Oxford Street with the help of kids from the THFC ‘Kickz’ community project. The striker worked with the kids on three different football boot designs, which will be made into three individual, customised Nike Total 90 Laser football boots, for him to wear Spurs’ Premiership games against Chelsea (Jan 12), West Ham (Mar 1) and the Republic of Ireland’s international friendly against Brazil at Croke Park. 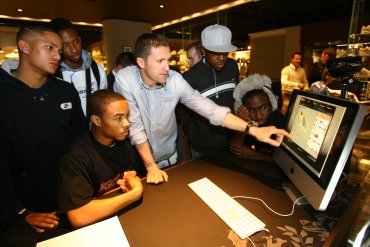 FB: The football boots you have designed with the kids from ‘Kickz’ look really impressive. How well do you think you will play in the customised football boots?

RK: Yeah they look good. We’ve gone for the white and blue Spurs colours in the Chelsea game, and added in a bit of Irish colouring for the West Ham game. For the Brazil game, we’ve mixed in green, white and orange (Ireland colours). I’ll tell you after the games how well I’ve played in them!

FB: You mention the Brazil game, do you think you can beat them?

RK: Why not. We played well against them last time round and perhaps could have won, so if we play well again, I’m sure we’ve got a good chance.

FB: How long have you been wearing Nike football boots for?

RK: I’ve been wearing Nike football boots since I was at Wolves when I was 18.

FB: What brands of football boots did you wear as a kid?

RK: As a kid, I couldn’t afford the more expensive football boots. My first pair of football boots were made by Gola, which I sold to a girl who lived round the corner so I could by myself some boots for gaelic football! I also remember having a pair of Roberto Baggio Diadora football boots. 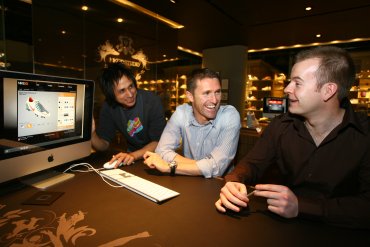 FB: What is the most important aspect for you in your choice of football boots?

RK: I think comfort is most important for me. You’re training everyday and then playing in matches so it is extremely important that your football boots are comfortable. The Nike Total 90 Laser’s are so comfortable, they feel like they’re moulded to my feet! They’re also really lightweight.

FB: You used to wear the Nike Mercurial Vapor football boot but now you wear the Total 90 Laser. What made you change?

RK: The Mercurial is a great football boot, I just find the Total 90 Laser offers my foot slightly more protection.

FB: Do you keep any of your used football boots as mementos? Did you keep the football boots you wore in the game in which you scored your famous injury time goal against Germany in the 2002 World Cup?

RK: Yes, I keep some of my old football boots at home. I kept the Mercurial’s that I wore at the 2002 World Cup. I actually wore the same pair of football boots throughout the tournament.

FB: How often do you change your football boots?

RK: I usually change them every few months, it often depends how well I’m playing in them!

FB: Thanks Robbie, judging by your current rich vein of form, we’d suggest you stick with your current pair of Nike Total 90 Laser’s!

Nike ID gives consumers a hands-on design experience and the power to express their individuality by personalising their sports footwear, including football boots. To find out more about Nike ID or reserve your Nike ID session, go to www.nikeid.com/londonstudio or call the reservations line on 020 7612 0990