When Chelsea take to the field of the Luzhniki stadium in their Champions League clash against Spartak Moscow, they’ll be playing on one of the few stadia in Europe to utilise a FieldTurf artificial surface, which has traditionally been a problem for those who have not played on it before.

“Spartak Moscow play on a Plastic Pitch WITH a Jabulani!? That’s barely football at all!” said A. Whiner, head of baseless criticism at the LMA

A few months back, Harry Redknapp said he “hated” the artificial turf at the Stade de Suisse, opting to rest players such as Aaron Lennon and Robbie Keane, on the basis that they ‘weren’t comfortable’ on the surface, which Spurs argued contributed to an unwelcome 3-2 loss to BSC Young Boys.

David Beckham also landed himself in a spot of bother when moving to the MLS, decreeing that the MLS should outlaw Artificial Turf and convert all pitches to grass, and later being forced into an apology.

And, as if to typify the issues had by English clubs and players on the subject of FieldTurf, fans of the Three Lions won’t need much reminding that the Luzhniki Stadium was the site of their 2-1 loss to Russia, arguably costing them a place at Euro 2008.

So, as players – how do you cope with the tricky artificial pitches that are on the rise all across the world?

Looking at Chelsea’s football boots for tonight, the basic idea is to play in an FG stud configuration at the very least, but some wiley pro’s try to take advantage of the different types of sole on offer to maximise their performance.

For example, in training for tonight’s game we noticed Chelsea’s signature boot-lover Florent Malouda has snagged himself a pair of custom Nike CTR360 Maestri‘s. 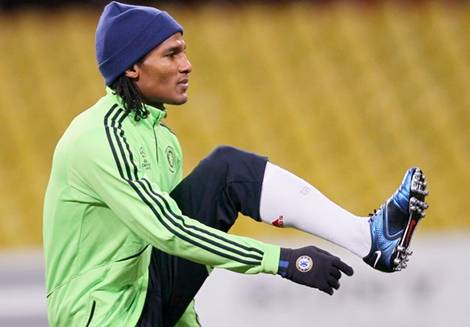 It looks to us that Malouda is using an AG (artificial Ground soleplate), to cope with the surface – not a soleplate that is an option on retail CTR360‘s.

We all know that after playing in 6 different types of football boots in the last 3 months that Malouda is very switched on when it comes to what’s on his feet – so by asking for an AG soleplate, is Malouda doing something that all the pro’s should be doing when playing on this FieldTurf?

Another option is to play in AstroTurf trainers – something which is generally frowned upon as many astroturf variants often don’t include the features of fully-fledged FG or SG football boots.

However, Shalrie Joseph – of MLS outfit the New England Revolution – plays on artificial pitches week-in, week-out and sees his adiPure ATRX fit for purpose. Though we don’t really like to use Mr Joseph as a ‘good example’ as he also likes to play without shin-pads on. Nutter.

When you come up against an Artificial Pitch like the kind that Chelsea are playing on tonight, what football boots do you prefer to tackle it?

What do you think of artificial pitches in general? What are the big differences for you?

Let us know in the comments, especially if you’ve been playing in an AG soleplate!

Written By
Kyle Elliot
More from Kyle Elliot
2011 has seen a swathe of weird and wonderful problems with football...
Read More