Fair warning: Graphic images of Wayne Rooney’s head and leg lacerations are included below, for Footy-Boots.com readers with an aversion to blood, please exercise caution.

After a summer of speculation and limited game-time in the pre-season friendlies, it was suggested by some skeptical England fans that Manchester United striker Wayne Rooney might have effectively ‘pulled a sickie’ to get out of international duty with England this weekend.

With qualification far from assured, it’s somewhat understandable that England fans, desperate to see the Three Lions get to Brazil 2014, would question the absence of their marquee striker.

However, few would question the former Everton man’s commitment to the White Shirt after he took to Facebook to demonstrate the extent of the injury. And fewer still were expecting the severity of that injury. 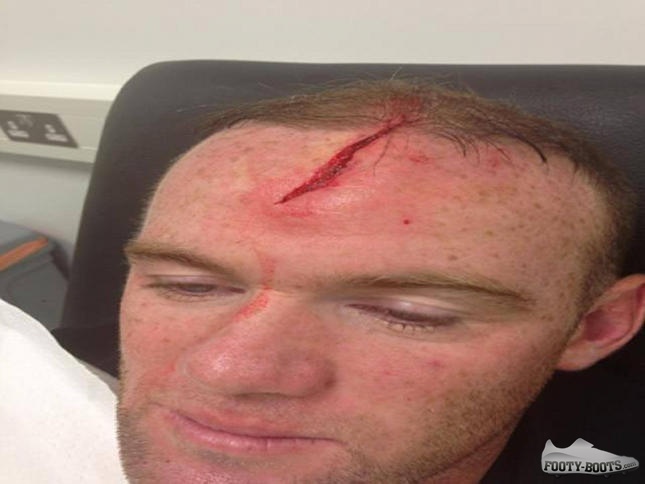 Facebook fans of Rooney were treated to the unpleasant sight of a two-inch gash on the striker’s forehead, leading all the way into his hairline.

The cause? It seems Rooney and teammate Phil Jones were involved in an hugely unfortunate collision, with Phil Jones’ size 10 adidas Nitrocharges scraping the England striker’s scalp.

Which part of the boot actually made contact with Rooney isn’t detailed, but Craig Johnston – former Liverpool midfielder and inventor of the adidas Predator technology – has made the safe assumption it was the studs. Johnston says that a change must be made or a professional player will end up taking adidas, Nike or any other boot brand over their dangerous design.

In an interview with Al Jazeera, Johnston says the choice of materials is one of the key factors;

"It's only a matter of time before a player sues a sports brand, because these boots are dangerous. Rooney's injury was horrible. I believe the material is too hard and gets sharpened on the ground.”

"The studs need to be softer, rounder.  The results are likely that you will see more players slipping over, but it will cause less injuries. Someone needs to stand up and say, €Hey, this is wrong.'" 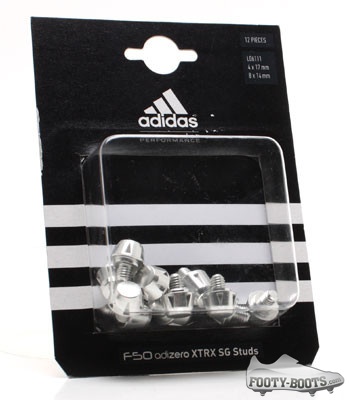 But, after dissecting the safety of Nike’s SG-Pro soleplates last time Wayne Rooney suffered a terrible cut to his leg, it’s important to look at what type of stud is likely to have caused such an injury.

If Phil Jones were training in the SG-TRX version of the Nitrocharge, the SG studs would certainly appear to be the most dangerous; but studs of that type have been used in football for decades, by hundreds of thousands of players of all levels.

If Wayne Rooney is the only (high-profile) instance of this stud type being harmful, I’d say that’s just bad fortune, not bad design. Not to mention that adidas’ SG studs are aluminium – a metal that is very unlikely to sharpen during play. 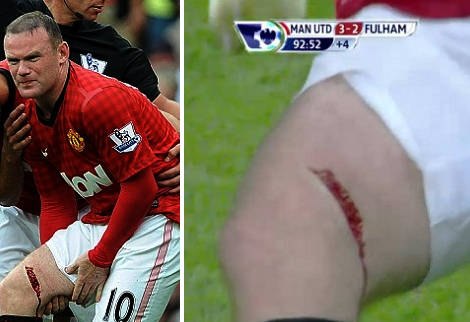 However, the shorter, triangular Traxion 2.0 studs are TPU – a material that is smoothed out during production – if a ‘nick’ were taken out of it’s shape, it might leave a sharp channel in some part of the stud, but probably not enough to do the sort of damage we see on Rooney’s head.

Bottom Line for us; Phil Jones is big unit. He joined Blackburn Rovers in 2002 – so for the last 11 years, he’s professionally employed to get better at kicking a football very hard. Wayne Rooney’s defining characteristic is he won’t give up on lost causes – do you think that tenacity dies off on the training pitch? We don’t.

It’s the unstoppable force meets the immovable object; if Phil Jones catches Rooney’s head instead of/as well as the ball – it doesn’t matter if he’s wearing ballet slippers – it’s going to cause some sort of injury. 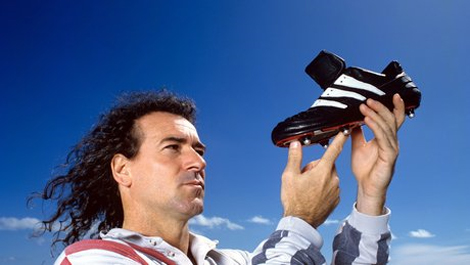 When an expert in the field like Craig Johnston offers up his opinion, we definitely sit up and listen – but we’ve also offered up (we hope) a decent counterpoint and some food for thought.

What do you guys think – are football boots becoming more dangerous? Is a big-name lawsuit an inevitability? Or as long as football is a contact sport, are freak accidents like this just part and parcel of the game?

Written By
Kyle Elliot
More from Kyle Elliot
adidas continue the 'Revenge Instinct' pack with a remake of the iconic...
Read More