That time of year has rolled around once again – The Football Boots awards are once again upon us!

The biggest set of awards in the industry are back, and it’s up to you to run the rule over the best that the world of football has to offer!

The 2009-2010 year has brought us some outstanding new football boots, with Nike reinventing it’s whole silo (as well as the addition of the CTR360 to their ranks) Puma and adidas have both had a turn at holding the crown of producing the lightest football boot, old hands like Mizuno have had a surge in popularity and newcomers like Under Armour, Concave and Pel'© Sports are back in force.

But the real measure of triumph for these brands would be to end 2010 with a Football Boot Award, because they know that it comes straight from the public – you,

With 5 categories to choose from, you can be sure that competition will be fierce, and you’ll be left to consider which boot deserves your vote very carefully. 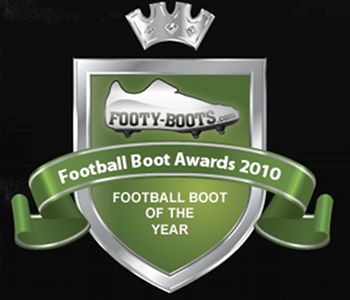 But it’s not just about the competition of the awards, it’s also about celebrating the best of the 12 months and looking at what’s to come

This year, we’ve been working harder than ever to make the awards the biggest and best yet, and teamed up with the biggest names in World Football to make sure that awards season is packed full of give-aways, prizes and competitions.

So, throughout the awards season we’ll be giving out some phenomenal prizes to lucky voters who spread the word of the Awards via Facebook and Twitter!

With football boots and training gear on offer from the likes of adidas, Mizuno, Puma and Under Armour (to name but a few!) you’ll want to make sure that you don’t miss out on your chance to win.

So – what are you waiting for – head on over to our Football Boots Awards microsite and get voting!