As we progress into the second half of the season, the intrigue and excitement inevitably grows for football fans across the country, where tears of joy, sadness and sheer anxiety will be shed in droves.

Clearly the three way duel at the top of the Premier League seems destined to last the course, and the battle to avoid relegation seems as potent as the black hole sucking everything towards it!

But let’s consider football boots for the moment. Many of the top professional players across the footballing spectrum are now enjoying the benefits of personally endorsed boots.

Amongst many, there’s the Ronaldinho R10 range, the David Beckham Predator range or the soon to be released Messi F50 range.

In previous years we have seen the R9 from Ronaldo, the ultra special gold Predators designed especially for Zidane and Cristiano Ronaldo’s green Vapors at Euro 2008 when all other Nike sponsored players were wearing their grandad’s boots from 1954!

However let’s break down the effects these personal triumphs of sponsorship have had on the players in question. Take Ronaldo and his R9 designed especially for the 1998 World Cup, a tournament old chubby cheeks would certainly want erased from history. Soon after, his injuries mounted and but for a resurgence between 2002 and 2004 he never recaptured his undisputed talent and wonderful form again.

Consider Ronaldinho, another victim of the ‘R’ range bug. After unanimously being accepted as the world’s most exciting and talented player as he lifted the FIFA World Player of the Year award not once but twice, he released his Nike Air Legend R10 range. However his sudden weight gain and increased time on the bench led to his demise and exodus from Barca. Luckily for Ronaldinho he still has time to peak yet again. 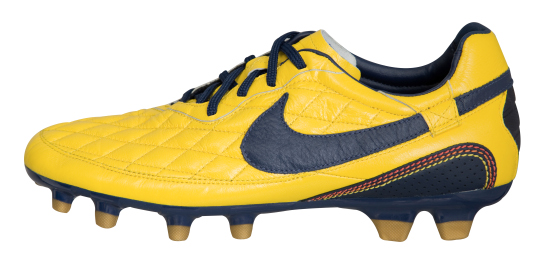 Beckham is another high profile footballer who since agreeing to design his own boots, left Manchester United in a furore and never recaptured the form that once elevated him to 2nd place in Fifa’s World Player of the Year. Although his profile remains and will continue to shine, his performances have waned since. Mind you, his first goal for AC Milan at the weekend won’t have done him any harm.

Last but not least we take Zinedine Zidane and Cristiano Ronaldo.

Zidane, a true legend, saw his career came to a forgetful if not entertaining end during the final of the 2006 World Cup. Although his boots shined brightly, the same couldn’t be said of the great man’s temper as he departed in spectacular fashion. And finally, Cristiano Ronaldo and his green Vapors looked the part coming into Euro 2008 as the best player in Europe. However in his new boots he failed to reach the heights he achieved at club level that season.

So here we sit in early 09 waiting for the new Messi silver F50 range. A talent like Leo’s comes around but once in a generation and his unique ability most certainly deserves the praise and attention it receives. Let’s hope he has better luck in his personalised boots than the lads who preceded him!