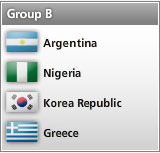 Despite being regulars at the World Cup finals now, South Korea didn’t make an easy journey to South Africa. Their passage was however confirmed with a 1-0 home derby win against North Korea who also qualified.

Captain Park Ji-Sung is treated like David Beckham in his home country. Having been involved in the last two World Cup campaigns the winger will be looking to create openings and bag the odd goal.

Lee Chung Yong AKA the ‘Blue Dragon’, has gained some important experience over the last season at Premier League club Bolton, where he has impressed. Aged just 21, he scored on his Bolton d©but and certainly knows where the goal is. Good on the ball and not afraid to dribble, he could become the next national hero of South Korea.

Huh Jung-Moo is a former South Korea international player who has scored at the World Cup (1986). He picked up the baton after the Dutch managers Guus Hiddink and Dick Advocaat moved on. This is his third period as manager and despite being unpopular during his previous tenure’s he is no beginning to pick up some recognition.

Written By
Felipe
More from Felipe
Match tickets could double as visas for the Champions League final between...
Read More