Last nights threat of a boycott by German football players, in their friendly game against Sweden was averted. 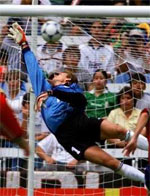 Germany’s sponsorship and equipment contract, stated players must wear football boots made by Adidas when playing for their country even if they have personal contracts with other football boot manufacturers. The only other national team said to have a similar agreement is Austria, who wear Puma football boots.

Written By
Felipe
More from Felipe
THE NEW PUMA KING FINALE IS OUT NOW – CLICK HERE TO...
Read More