With 2008 fast approaching, we look back at some of the highlights this year.
2007 Footy Boots Review of the Year Part 1 of 4 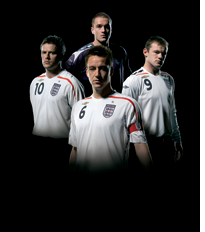 Umbro kicked off the International term with the launch of the new England home shirt.

Footy Boots were there in Manchester when the likes of John Terry, Michael Owen, Steve Gerrard, Paul Robinson and Owen Hargreaves stuck out their chests, proudly boasting the good things to come whilst wearing their England Shirt this year. As we all know too well, Croatia and Russia pipped England to the Euro 2008 finals. The good news was the inadequate Steve McClaren moved on.
Click Here to buy the England Home Shirt with 50% off!

The football boot said to help enhance the defensive skills of the wearer – if only it could have helped Terry avoid injury when England and Chelsea needed him….Click Here to buy the Umbro X Boot Destroyer

Unlike the X Boot Destroyer this football boot was for attackers! Owen played 8 games for England scoring 4 goals in 2007, a goal every other game at international level is a good return, but like Terry he missed the crucial games for England.
Click Here to buy the Umbro X Boot III

Puma kicked off with the Puma V.306, the little brother of their ‘pro boot’ the V.106. An astonishingly lightweight football boot in the mid priced bracket.
Click Here to buy the Puma v.306

Adidas launches the official matchball for the 2007 Champions League Final


They always seem to get their timing right at Adidas, manufacturing a new ball to coincide with a major final or championship…. Anyhow, AC Milan liked the ball and walked off with it in Athens, along with the Champions League trophy that is.
Click Here to buy the Adidas Finale Athens football

Formerly a major Puma football boot man, Hargreaves was one of the German brnad’s ‘big names’, but then he defected to Adidas and finally ended up with Nike. A true football boot journeyman.
Click Here to buy the Nike Air Legend


Even a new away shirt was unable to rally the Scottish team through to the Euro 2008 finals. Unlike England, they seemed to punch well above their weight, beating the French both home and away.
Click Here to buy the Scotland football kit

The Total 90 Laser was the major football boot launch for Nike in 2007, with many of their World Class stable of pro players opting for the football boot with a sweetspot. But, why did they launch with that bright yellow number? Was it to cleanse the stock of yellow before the decent colourways were launched?
Click Here to buy the Nike Total 90 Laser

The Sprintfit was launched to replace the hurried predecessor the Pro Rage, but was let down in 2007 by the form of its two main men. Both Thierry Henry and Andriy Shevchenko failed to perform this year.
Click Here to buy the Reebok Sprintfit

Written By
Felipe
More from Felipe
England go for a belt and braces approach in World Cup race.
Read More