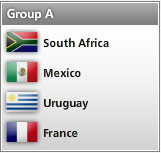 After a year under the guidance of Sven-Göran Eriksson Mexico nearly blew their World Cup qualification. But after parting company with the Swede they got back on track and qualified with when the beat El Salvador, despite the match almost being abandoned due to bees in the goalmouth!

Mexico have an abundance of young talented players who won the Under 17 World Cup in 2005. Rafael Marquez with 91 caps and top level experience with Barcelona will be called upon to not only beef up the defence, but also bridge the gap between the seniors and the youngsters.

Carlos Vela is one of the highly talented youngsters who could come good. Having disappointed at Arsenal, the stage could be set for the striker to demonstrate his pedigree and underline why Arsene Wenger persists with him.

Javier Aguirre helped steer the Mexicans to the last World Cup and they progressed through to the last 16 where they were knocked out by the USA. After picking up from Eriksson, he’s proved his worth and is very well respected by his squad.