After our extensive preview back in August, Footy-Boots.com has had some proper time to get their thumbs stuck into the latest FIFA! Read on to find out what we made of it! 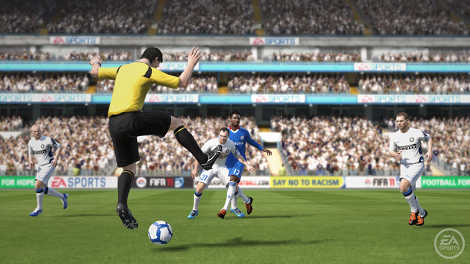 The FIFA series has always been about delivering a slick, professional experience to the player and this year is definitely no exception. The graphics engine has been tweaked, rather than overhaul from FIFA 10, which is most noticeable on the player models.

There’s more variety in player shape an size, meaning that bulkier players like Micah Richards and Reno Gattuso feel like they pack a bit more power when going shoulder to shoulder with the Leo Messi’s of the world, rather than just feeling like any other player.

Another graphical improvement is the player’s faces – FIFA has always struggled to find the right way to capture player’s likenesses, but this year is definitely a big step in the right direction, with players features and animations looking more rounded and realistic, rather than blocky and awkward.

The menu system hasn’t received much of an overhaul from FIFA 10, but that’s no big criticism as the system is easy to navigate as well as easy on the eye – it’s just nice to buy a new game and have it feel like a new game, rather than having some elements lifted from last year’s edition.

There’s also a huge focus on customisation in this year’s FIFA, and one of the best idea’s that EA have had in ages is to give players the option of heading out of the game and onto their computers.

Logging onto the FIFA 11 Creation Centre, gamers can create custom tactics, teams and players and then download them onto their consoles using a keyboard and mouse – which is infinitely easier than fiddling with an on-screen keyboard and menus.

It’s no without it’s drawbacks though, as players must create an EA Sports account (which is no big deal if you’ve ever played a past EA Sports game online) and it can be a little sluggish. 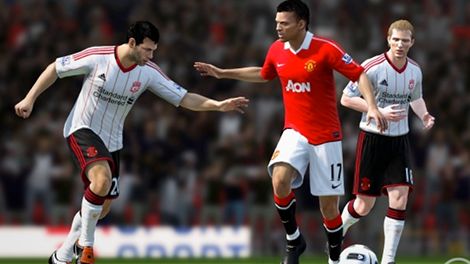 FIFA 11’s sound engineers do a great job of creating a fantastic immersive atmosphere during games, with club-specific chants, players calling for the ball and a dynamic crowd that reacts to every booking, shot and goalmouth scramble.

That said, it’s nothing revolutionary – much of the audio is brought across from FIFA 10, including, disappointingly, a lot of the commentary. The Martin Tyler/Andy Gray partnership is a highlight for a lot of players, and seeing a lot of the more common phrases and soundbites stay the same as it’s predecessor is a little disappointing.

But for every two times you hear Mr Gray suggest both you and your opponent have been ‘A little tentative, negative perhaps’ after coming in 0-0 at half time, Martin Tyler will have spout some new anecdotes about a player or comment on their strengths.

For example, taking Iniesta on a mazy run will have Tyler extolling the Spain captain with things like “we’ve come to expect this from Iniesta, he’s just so good with the ball at his feet”. They’re lovely touches and I’d love to see much more of this sort of thing for the inevitable FIFA 12.

As for the soundtrack, EA Sports have done their usual excellent job of sourcing tracks from all around the world to accompany the game, (personal favourites include Two Door Cinema Club’s I Can Talk and Jump Jump Dance Dance’s White Picket Fences).

FIFA 11 is big on customisation, as mentioned before, and that extends to the sounds. The custom chant feature definitely the one you can have the most fun with. Die-hard fans can record audio on their mobile phone next time they’re at the match (or rip them off YouTube videos) and transfer it into the game as soon as they get home – where as more casual players can record loving homages to Titus Bramble with a few mates straight into their PC’s microphone. 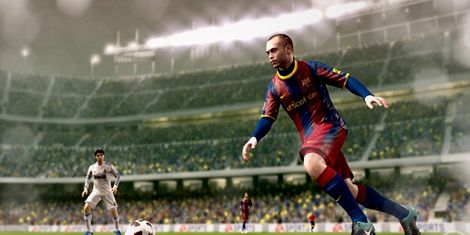 Like much of FIFA 11, the gameplay is about making the subtle tweaks that many players have been longing for and making the game more fun to play.

Passing is the big sell this year, with a new Pro Passing system that factors in how much power you’re adding to the pass to assess which player you’re trying to distribute to. Being honest, it’s not the huge leap you’d expect it to be – again doing much the same as last year.

Oddly enough, passing has improved, but not in the areas that FIFA 11 advertises on the box! You can’t ping-pong pass anymore – players no longer ricochet one-touch passes off their instep to their team-mates. Depending on their skill level and the angle/speed of the pass, players now convincingly take the ball into their stride before getting another pass away.

This improvement now means the game really rewards players who keep hold of the ball and probe the defence by constantly finding a man in space, and chances and goals feel hugely fulfilling to carve out.

Crossing is another big improvement, after feeling lost and floaty in FIFA 10, crossing in FIFA 11 now feels solid and meaningful. Again, this is dependent on plenty of factors (quality of player crossing, finishing of player receiving, aggression of defending keeper, etc.) but whipping in a cross for your striker now feels like an opportunity, rather than something you’re forced to do after running out of pitch.

In the new Be a Pro: Goalkeeper mode, controlling the keeper has, mercifully, been kept simple. Using one stick to move and the other to dive means that the Keeper is the easiest player to control on the pitch – but it’ll take many long, long, matches of you having nothing to do before you feel like you can do anything worthwhile for your team.

A big deal this year is that FIFA 11 is the first game ever to feature 11 vs 11 online multiplayer matches, and boy, are they a giggle. If you can party up with a few friends with microphones, organising your mates into an offside trap, scream for your keeper to come and play it or begging your centre-mid to feed you a through ball are all the sort of experiences that online gaming was made for.

That said, FIFA still keeps all the classic modes that you’ve come to expect, such as classic 1-on-1 team, so whether you’re a fan of Be A Pro or more of a traditionalist, FIFA 11’s online mode has something for you.

FIFA 10 is a truly great game that, even after 12 months on the shelves, still feels fresh and a joy to play – which in many gamer’s opinions makes it a bonified classic, so following it up was always going to be the an uphill job for the guys at EA Sports.

As a follow-up, FIFA 11 does a truly admirable job. I’ve seen many reviews slam it for not offering up enough originality – and in the ‘main’ game, that’s probably true – improved passing and crossing mechanics, tweaked player models and a small smattering of new commentary doth not a worthy sequel make.

But as a full package, including the Creation Centre, Be a Pro Keepers, 11 v 11 online matches, the Player Manager career mode, custom audio and little tweaks like optional handballs make it difficult to imagine a more complete football experience exists.

If you have little interest in tweaking custom teams and tactics and playing online, maybe wait for a pricedrop on FIFA 11 before you buy to feel like you’re getting your money’s worth. But if you really want to get stuck in to all these features and make the most of what the game has to offer…who am I kidding? You’ve probably already got it by now!

Written By
Kyle Elliot
More from Kyle Elliot
adidas unveil their latest design, to be used in the Women's World...
Read More