Fieldoo.com is an online network for football players and agents who want to take the next step in their career. After a very successful pre-launch,' Fieldoo.com has grown its user base to over 4,000, spread across 100 countries and are now launching their highly anticipated Agent and Scout Platform. 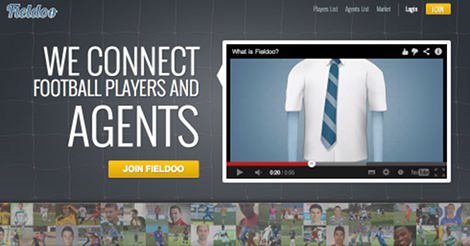 Player transfers and dealings have always been a complicated and somewhat mis-understood area of the beautiful game. Fieldoo.com offers a modern take on a complicated job, allowing players to flaunt their skills in front on an audience of agents.

Fieldoo.com is currently being used by a multitude of different players, such as Jairo Suarez, the 27 year old Colombian international, Jasmin Kurtic, a 24 year old playing for Serie A side Palermo and Cristian Adrianzen, the 18 year old Peruvian starlet currently being tracked by a number of European clubs.

The launch of the Agent and Scout Platform will help these players, whilst also providing an invaluable service for agents. Fieldoo.com will allow for Agents who are already established or those that are just entering the industry to quickly filter through a comprehensive list of players whilst also providing them the tools to raise their profile and the career of those they represent.

Having received such a strong response from the football community, Fieldoo.com achieved their first success story upon opening the platform to a select number of agents. Serbian scout and agent Sasa Cuk of Spanish agency Pandora, got the task to find a central defender with youth national caps. Browsing through Fieldoo he found Slovenian footballer Matej Rapnik formally of SPL team Hearts, who he then signed for Thailand champions SCG Muang Thong United shortly after.

What else is there to know?

– The network that allows for players to present their skills in the digital age is launching it's Agent and Scout Platform; letting player representatives find new talent, present their portfolio, create their own webpage and enter new markets.

– Fieldoo.com is offering new technologies to allow for networking, hiring, signing and other agent representative activities to be completed efficiently within the platform

– Fieldoo.com currently has over 4,000 users from over 100 countries worldwide

– Fieldoo.com made their first player success story whilst in their Beta testing period.

To find out more, head to www.fieldoo.com!

Will you upload your football CV to Fieldoo? Let us know with a comment!