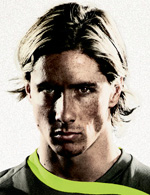 But then, you probably knew that. More than likely in fact if you happen to live on Merseyside.

Footy Boots can reveal that the latest Nike video viral is out and it’s a belter. No performing dogs or breakdancing 14 year olds here (Britain’s got talent my backside), this is true entertainment. Clever, original and entertaining – everything that ITV’s Saturday night schedule isn’t.

The viral shows that while Kopites can’t cheer-on England this summer, they will be fully committed to Liverpool’s number 9. As a camera swoops around the European Capital of Culture, Spanish flags are flying everywhere. Liverpudlians are seen brushing up on their Spanish in evening classes, buying paella pans and snacking on Tapas.

The viral concludes with a bemused looking Torres watching his influence first-hand during a Spanish flavoured kick-about in the park.

An insider said: “During filming Fernando was surprised at how much of an impact he had on his adopted home. The way things are going Liverpool could be a bi-lingual city by the start of the 2008/09 season.”

This clip kicks off a series of virals that will be released over the next few months by Nike showing how athletes, managers and fans are taking their game to the next level.

To watch more video courtesy of Footy Boots all you need to do is click here.

Written By
Felipe
More from Felipe
We've unleashed Kyle to road-test the Nomis Spark. Read the no holds...
Read More