Sunday’s Euro 2008 final will no doubt be an intense affair. One key battle will undoubtedly be between two Premier League midfielders; Arsenal’s Cesc Fabregas and Michael Ballack of Chelsea.

Luis Aragones has only decided to start the young Arsenal playmaker in his side once during Euro 2008 so far – in the final group game victory over Greece. Despite this, it seems that Fabregas may be set for a starting berth in the final following his excellent performance in their 3-0 semi-final win over Russia; this after coming on for the injured David Villa in the 34th minute. 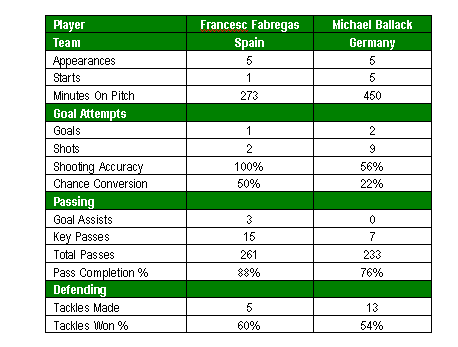 Ballack has been an ever-present starter in the German squad at Euro 2008 and scored a crucial goal in their 1-0 Group B win over Austria, as well as the eventual winner against Portugal in the quarter-finals. The Chelsea schemer is yet to assist a goal however, unlike Fabregas; who has managed three so far – all coming in the two matches against Russia.

Ballack has managed to run the furthest of any German player in all five of his matches so far at Euro 2008. However, in the one match that Cesc Fabregas did manage to start for Spain, he ran further in that game than Ballack has managed in any of his five appearances in the finals.

Which of the leading midfielders will triumph in the final?

Written By
Felipe
More from Felipe
Mourinho admits he won't be going to Inter and would consider a...
Read More