Cesc Fabregas could be set to make his postponed debut as a Puma player this weekend, but his Puma PowerCat 1.12 football boots are already starting to get people talking before he’s even kicked a competitive ball! 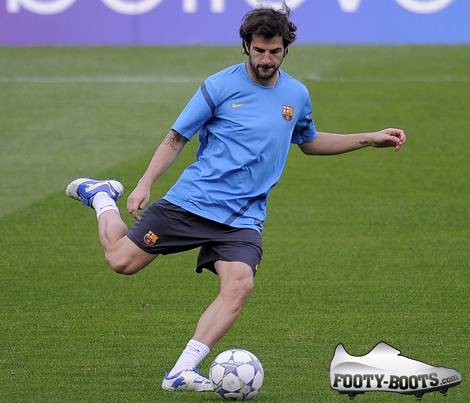 Following an unfortunately-timed ankle injury to the ex-Arsenal skipper against Valencia late last month, Puma are yet to see their new star signing play a minute in their new football boots.

Unfortunately, the Spainish international will miss giving the new Puma PowerCat 1.12 it’s big debut on the biggest stage in Club football tonight as he is not considered for the Barcelona clash with Vikoria Plzen in the UEFA Champions League.

Next up for Barca is Seville at home this weekend.

In some photos snapped at an open training session at the Camp Nou yesterday, it would appear the crafty midfielder is already tweaking his new football boots exactly to his liking.

Whilst wearing the Nike Ctr360, Fabregas was more often than not spotted in bespoke version of the ‘control’ football boots that included the soleplate from a Tiempo Legend.

And keeping in with that habit, the World Cup winner has already got his hands on a custom version of the Puma PowerCat 1.12 with a Puma King soleplate.

Many professional players prefer not to play in bladed versions of the best football boots; we’ve seen the likes of Michael Carrick play in a similar soleplate on many occasions before, so it’s almost unsurprising to see Cesc ask for such a modification,.

What is a surprise is that the ex-Gunner hasn’t even given the sole of the new Puma PowerCat 1.12 a chance!

What do you think of Fabregas’ custom football boots?

Written By
Felipe
More from Felipe
Arsenal’s Nose Put Out of Joint Spurs fired 5 past Arsenal to...
Read More