Sky Sports TV pundit Chris Kamara and The Football Association are asking amateur footballers from up and down the land to show them your skills by uploading your blockbuster goals to The FA’s Official YouTube channel to mark the launch of The FA’s new Grassroots Goal of the Month competition. 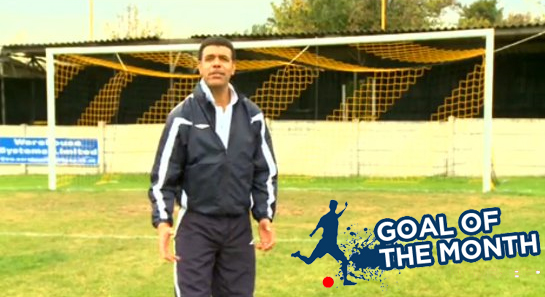 If you think you or your team have scored a screamer, be it everything from a 40-yard lob to a well worked tap in, then simply upload the clip of the goal to the FA’s YouTube website. At the end of each month Chris Kamara and his judging panel of experts will select a shortlist of three goals that will then go to the public vote.

The November Goal of the Month competition is open now and videos can be uploaded until the 25th November before Chris and his panel nominate their favourite three goals to face the public vote.

Voting will take place from 28th November before the lucky winner is officially announced on 4th December. The competition is open to any player and team playing in affiliated 11-a-side adult football.

As well as receiving national acclaim, The FA has also teamed up with Umbro to provide the inaugural winners with a fantastic package for their team. This will include a bespoke Goal of the Month winner’s T-shirt, 18 pairs of the latest Umbro Speciali football boots, a brand new team kit, 10 Umbro Dynamis Laser Pro balls, the official matchball of The FA Cup, as well as training hurdles, cones and bibs.

This is an unbelievable competition! I feel honoured to have been selected for the judging panel and I cannot wait to see all the fantastic goals come flooding in.

The grassroots game is full of hidden talent and I’m really looking forward to hopefully finding the next Steven Gerrard or Wayne Rooney over the coming months.

The FA’s Grassroots Goal of the Month competition is the latest initiative to come from The FA’s 11-a-side recruitment campaign, which aims to inspire and support adults to keep playing 11-a-side football. The FA has a stated objective to retain 30,800 men’s teams & 480,000 players by 2012.