As adidas continue their onslaught of colourways for the F50 adiZero (The World’s Most Colourway-ed Boot™), adidas have released a new version almost completely devoid of colour! 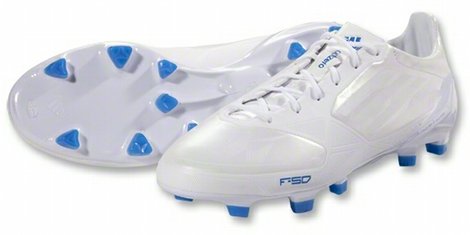 Looking crisp and clean, the synthetic F50 adiZero is the perfect boot to pull off this (almost) whiteout colour scheme.

It’s long been the stereotype that only the flashiest of players can pull off white-out boots, so it would seem that the super-light, super-white adiZero is a perfect match for anyone who fancies themselves as a stand-out player. 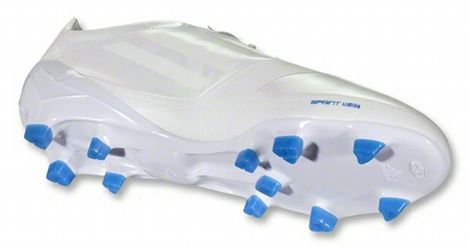 At 165g / 5.8oz, the adiZero is one of the single lightest cleats on the planet, helping give you an advantage on the pitch.

Teamed up with a external SprintWeb, internal TPU support bands and a new Traxion 2.0 stud system, the adiZero is also amongst one of the most stable, too – helping lock your foot in place for high-velocity sprints and quick lateral cuts across the pitch.

Having given them the official Footy-Boots.com test, we can safely say the adiZero’s offer everything they promise in terms of lightweight speed and solid underfoot stability, making them one of our favourite football boots on the market today.

And it’s safe to say that if you’ve been putting off buying a pair for the spate of garish colours on offer, you now have a colourway you can call your own!

If you fancy a pair of the adidas F50 adiZero – White / Running Blue, expect to pay £155 when they release June 15th in the UK and $210 US when they his stateside in early July (though this date is subject to change).

Let us know what you think of these new cleats in the comments, or on the boot-o-meter!

Written By
Kyle Elliot
More from Kyle Elliot
Lionel Messi's adidas F50 adiZero Primes have been stolen, and it's up...
Read More